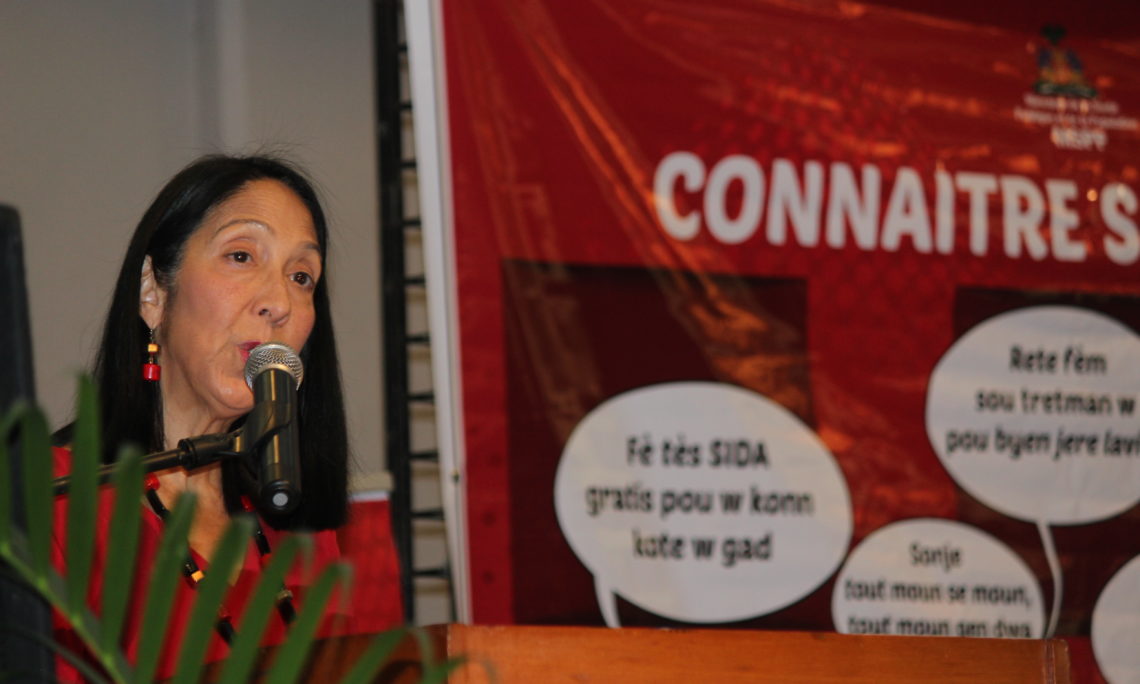 Port-au-Prince – U.S. Ambassador Michele Sison joined Minister of  Public Health and Population  Marie Gréta Roy Clement and representatives from UNAIDS and civil society to commemorate the 30th annual World AIDS Day on December 1st at the Karibe Hotel. The event included speeches and presentations from key partners in the fight against AIDS, including persons living with HIV (PLHIV), and provided an opportunity for the HIV community to convene and reflect on the many successes of Haiti’s National AIDS Control Program and discuss shared goals moving forward.

Ambassador Sison noted in her remarks the tremendous progress made in the care and treatment of people living with HIV/AIDS since the first World AIDS Day in 1988, and she recognized the Ministry of Public Health and Population (MSPP) for its continued leadership in moving Haiti closer to epidemic control of HIV. “I commend the tireless efforts of the Ministry of Health and Haiti’s National AIDS Control Program to improve the provision of HIV services in Haiti. Your guidance and leadership have been critical to ushering in new policies and technology. […] As we move toward epidemic control — your leadership will continue to be key to the program’s success.” Within her remarks Ambassador Sison also urged the Haitian government to continue greater domestic financing for health to improve health outcomes for all of Haiti’s people.

The U.S. Government, through the President’s Emergency Plan for AIDS Relief (PEPFAR), is a key Government of Haiti partner in the prevention and treatment of HIV in Haiti. Since 2004, PEPFAR, in collaboration with U.S. Agency for International Development (USAID) and the U.S. Centers for Disease Control and Prevention (CDC), has worked with the Ministry of Health and implementing partners to provide free, life-saving treatment to over 100,000 people living with HIV and to develop critical health information systems for tracking the disease. Globally, PEPFAR recognizes Haiti as one of its 13 priority countries for accelerating HIV epidemic control – a testament to the success of the PEPFAR Haiti program and a significant investment in the Western Hemisphere region.

PEPFAR is the United States government’s response to the global HIV epidemic, which represents the largest commitment by any nation to address a single disease in history. For more information, please visit www.pepfar.gov.