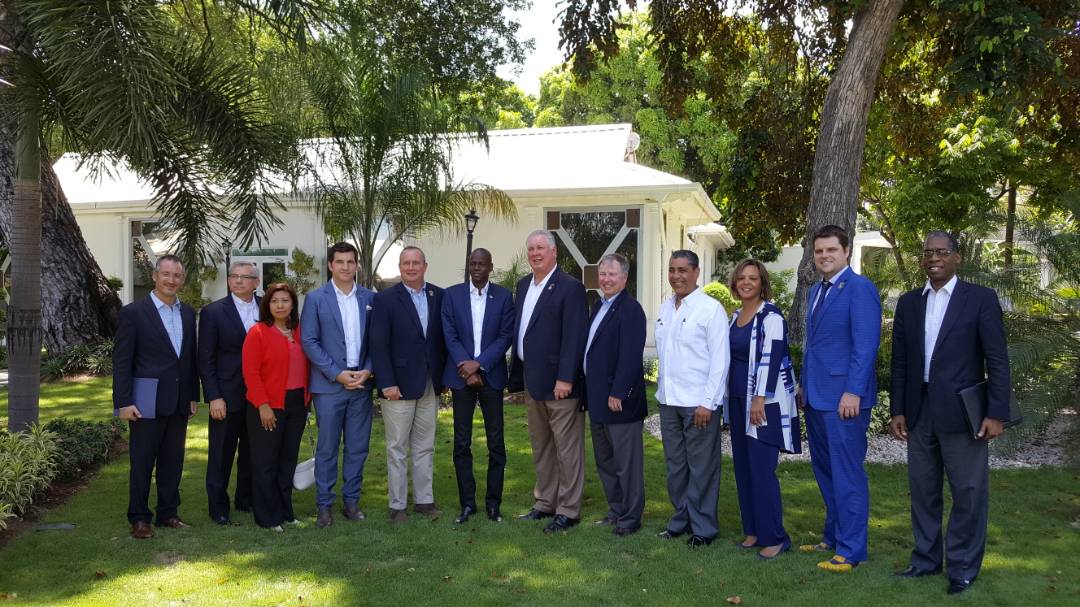 A Congressional delegation visited Haiti on July 30 led by Representative Jeff Duncan, Chairman of the Subcommittee on the Western Hemisphere within the U.S. House of Representatives Foreign Affairs Committee.  The delegation scheduled a visit to Haiti as part of a four-country trip focused on strengthening regional security cooperation and coordination.  Chairman Duncan traveled with eight other members of Congress to reinforce the strong U.S.-Haiti bilateral relationship and reaffirm the United States’ commitment to strengthening security in the region.

During their meeting with President Jovenel Moise, Chairman Duncan and the delegation congratulated the President on maintaining a stable political and security environment that has facilitated the departure of United Nations Stabilization Mission in Haiti (MINUSTAH) military forces.  On the topic of security, the delegation reaffirmed the U.S. government commitment to supporting the continued development of the Haitian National Police (HNP).

On their visit to the HNP School, Director General Michel-Ange Gedeon provided the delegation with an overview of the HNP, including its recently adopted five-year strategic development plan.  The Congresspersons then toured the HNP School grounds where police recruits receive basic training.  They observed several infrastructure projects funded by the Department of State Bureau of International Narcotics and Law Enforcement Affairs (INL), including a pavilion, new classrooms, and an auditorium.  Since 2010, INL has provided training, equipment, and vehicles, and completed numerous infrastructure projects valued at over $140 million to support HNP development and professionalization.

The delegation also visited Saint Damien’s hospital, a U.S. government-supported health facility that provides high quality medical treatment and social services for disadvantaged and sick children in Haiti.  Through funding from the President’s Emergency Plan for AIDS Relief (PEPFAR) and implementation support by the Catholic Medical Mission Board, a longstanding U.S. Centers for Disease Control and Prevention partner, and CARIS Foundation, a key USAID partner, Saint Damien’s has improved and expanded its provision of quality HIV/AIDS and tuberculosis services and support for orphans and vulnerable children (OVC) infected and affected by HIV/AIDS.  Delegation members heard testimonies from young adults living with HIV who work as peer educators and members of a mothers club who participate in the USAID-funded CARIS/BEST project, which provides household economic strengthening, psychological support, and counseling to OVCs and their caregivers to mitigate the impact of HIV and improve retention of people living with HIV in treatment and care services.

U.S. Embassy Chargé d’Affaires Brian Shukan thanked Chairman Duncan and the congressional delegation for their interest in the work that the U.S. government conducts in partnership with the Haitian government and other implementers, to make Haiti more secure, healthy, prosperous, and stable.