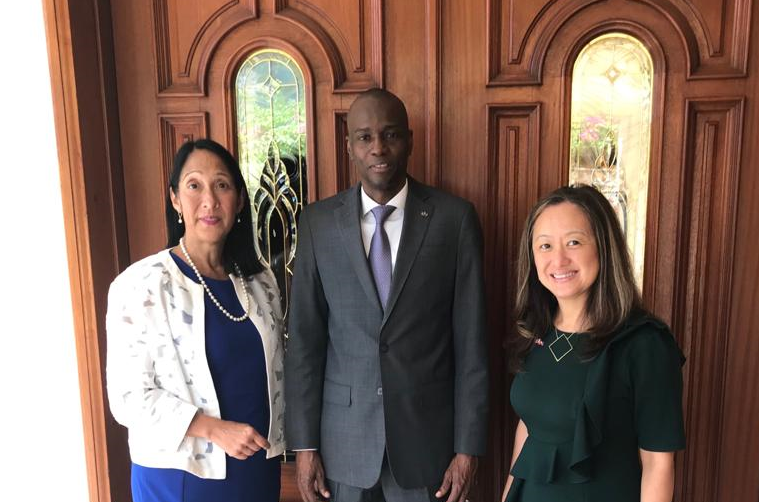 (Port-au-Prince, Haiti) June 26, 2019 – Principal Deputy Assistant Secretary (PDAS) in the Bureau of Western Hemisphere Affairs at the U.S. State Department, Julie Chung, visited Port-Au-Prince June 24-25.  During her visit, PDAS Chung underscored that the United States remains committed to democracy, and stressed that finding solutions to Haiti’s current political and socio-economic impasse must be a Haitian-led process.

PDAS Chung met with President Moïse, Senate President Cantave, Chamber of Deputies President Bodeau, and representatives from Haiti’s political parties and civil society to further understand the challenges to forming a government, as well as to understand obstacles to advancing the national dialogue. She also relayed the U.S. government’s concern about how corruption and impunity have greatly impeded Haiti’s development goals, and stressed the importance of passing anti-corruption legislation, as well as the need for an independent judiciary to investigate and prosecute corrupt actors.

PDAS Chung discussed with civil society leaders and the private sector how to restore Haiti’s micro and macroeconomic stability so that the basic needs of all Haitians are met.  During a meeting with the Haitian National Police (HNP) Director General Gédéon, she participated in a roundtable with the community policing unit to learn how the HNP is tackling increased gang violence. PDAS Chung continued this discussion with youth representatives who offered their views on the issue of gang violence as well as potential solutions to engage Haiti’s younger generations.

PDAS Chung also met with the Taiwan Ambassador to Haiti and they underscored the importance of democracy and transparency.

PDAS Chung’s visit highlights the continued U.S. – Haiti partnership, as well as our joint efforts for a more safe, secure, and self-reliant Haiti.