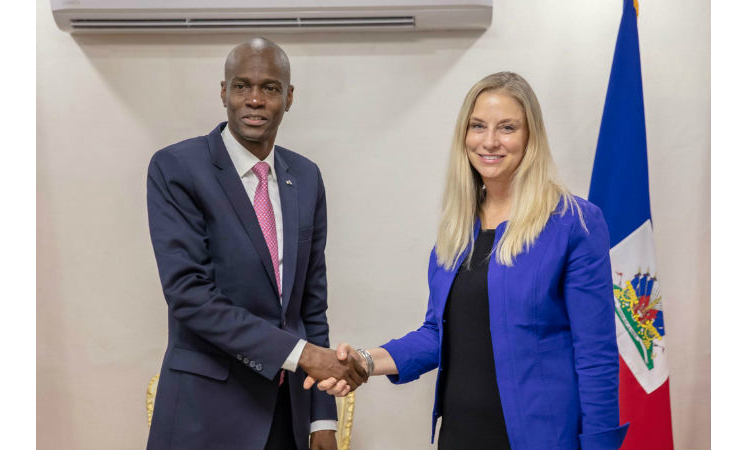 (Port-Au-Prince, Haiti) April 5, 2019 – Deputy Assistant Secretary in the Bureau of Western Hemisphere Affairs at the U.S. State Department, Cynthia Kierscht, visited Port-Au-Prince, Cap-Haïtien, and Ouanaminthe, Haiti April 1-5.  During her visit, Deputy Assistant Secretary (DAS) Kierscht highlighted the many ways in which the United States and Haiti work together to advance shared goals for a more safe, secure, and prosperous Haiti.

In Port-Au-Prince, DAS Kierscht met with President Moïse, Senate President Cantave, Chamber of Deputies President Bodeau, and a wide variety of political parties to reiterate U.S. encouragement for an inclusive dialogue to address the needs of the Haitian people. DAS Kierscht also met with Port-Au-Prince Chief Prosecutor Villard, First Instance Court Chief Judge Saint-Vil, as well as with a range of civil society and rule of law actors.  In her meeting with the Haitian National Police Director General Gédéon, she highlighted the need for enhanced security and stability, with a focus on human rights protections.  DAS Kierscht also learned about efforts to combat gang violence in a conversation with Youth Explorers and ACCESS English students.

As part of U.S. Embassy Haiti’s ongoing efforts to promote economic growth, DAS Kierscht met with Minister of Economy and Finance Décembre and Governor of the Bank of the Republic Dubois to talk about Haiti’s macroeconomic stability and the staff-level IMF agreement for an Extended Credit Facility.  DAS Kierscht also met with representatives of the private sector, including young entrepreneurs, to discuss Haiti’s economic challenges, opportunities, and the investment climate and to learn about ongoing programs to support entrepreneurship.

In the north, DAS Kierscht visited the CODEVI and Caracol industrial parks, which both employ tens of thousands of Haitians primarily in the textile and apparel industry.  These industrial parks benefit from U.S. trade preferences through the Haitian Hemispheric Opportunity through Partnership Encouragement Acts, the Haiti Economic Lift Program, and the Caribbean Basin Trade Partnership Act, which give textile and apparel producers in Haiti duty-free access to the U.S. market. DAS Kierscht also met with several NGOs and government officials in Ouanaminthe to discuss their efforts at the border to assist vulnerable returning migrants and combat human trafficking.

Deputy Assistant Secretary Kierscht appreciated the opportunity to meet a wide cross-section of Haitian society and looks forward to following up on the priorities discussed during her visit.