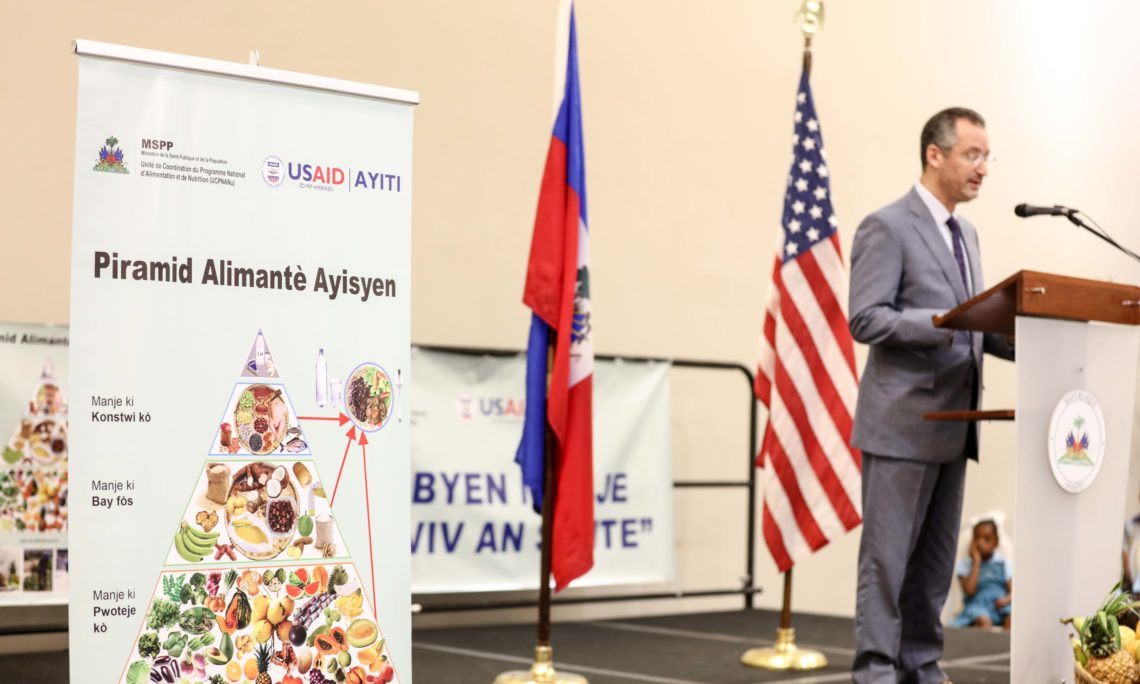 To address the challenge of malnutrition in Haiti, the United States Agency for International Development (USAID) and its partners collaborated with the Ministry of Health (MOH)to promote healthy food choices based on locally available foods and global scientific evidence.  In close collaboration with the MOH, the MyPlate initiative involved pre-testing the pyramid for understanding and cultural appropriateness, printing and launching the new food pyramid, and educating.

This USAID project revised the Haitian food pyramid graphic and will use the information to educate Haitian households through a network of health providers, community health workers, community leaders, health development partners and government officials.

The pyramid-shaped food diagram represents the optimal number of servings to be eaten each day from each of the basic food groups.  The Haitian Food Pyramid was originally designed and implemented by the Ministry of Health in 2005 in collaboration with the World Bank and the World Health Organization.  In 2015, the MOH requested USAID assistance to update the “MyPlate” food pyramid with the most current evidence and disseminate it across the country.

The new food pyramid reflects national recommendations for dietary practices for Haitians over the age of two. The images seek to promote healthy food choices and be based on locally available grown foods and global scientific evidence.  In March 2015, the USAID/Haiti Mission Director approved funding to revise the Pyramid.

“The development of the new food pyramid was an inclusive multi-sectoral approach involving key actors such as health providers, teachers, community leaders and households, as well as advocacy, policy strengthening, and multi-sectoral and institutional support,” said Shukan. “By following the Haitian Food Pyramid, Haitians will be able to meet their nutritional needs while reducing the risk of diseases such as obesity, type 2 diabetes, cardiovascular disease, osteoporosis and certain types of cancer.”