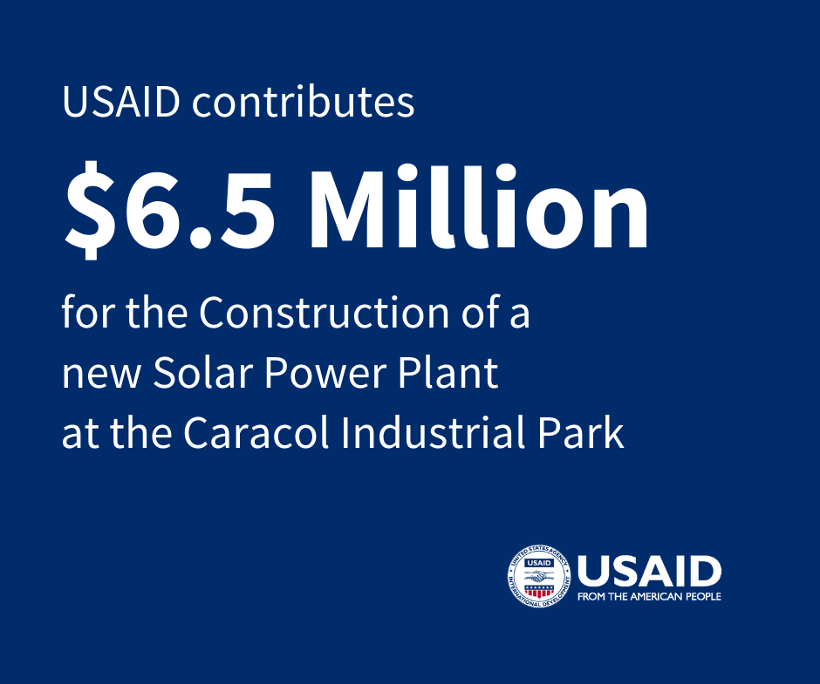 USAID contributes $6.5 Million for the Construction of a new Solar Power Plant at the Caracol Industrial Park that will lower Electricity Costs in the Region

[Port-au-Prince, January 25, 2021] – The United States government, via the U.S. Agency for International Development (USAID), in partnership with the Inter-American Development Bank (IDB), gave $6.5 million for the construction of a new solar power plant at the Caracol Industrial Park. This solar power plant will improve access to electricity services for tenants at the Caracol Industrial Park (PIC) and 14,000 residential customers in the surrounding communities and will lower overall electricity costs. This large renewable solar energy program initiated by IDB, to which USAID is contributing, will finance the construction of two solar power plants inside the PIC, an 8 MW plant and a 4 MW plant, with a construction value of $23 million.

The U.S. Ambassador to Haiti, Michele Sison, said: “In addition to attracting investors and creating jobs, more affordable and reliable energy will improve the lives of residents living near the PIC.  The U.S. hopes this partnership with the Inter-American Development Bank will contribute to an improved standard of living for Haitian families.”

Electricity supply to the PIC is currently provided by the $17 million thermal plant, which was built in 2012 by USAID. The plant is a 10 MW thermal power facility operating since 2013 with heavy fuel oil and/or diesel by the non-governmental organization National Rural Electric Cooperative Association (NRECA), on behalf of USAID. Currently, the plant provides electricity service to five industrial clients operating 14 factories inside the PIC and five neighboring communes, serving more than 14,000 residential and business customers. However, tariffs are high for industrial users due to the price of imported fuel. (They are far higher than prices in the Dominican Republic, for example.)  High energy costs threaten the competitiveness and sustainability of the PIC.

With the construction of these two solar power plants, USAID and its partners, including the IDB and Government of Haiti, are seeking to improve the economic competitiveness and sustainability of the PIC and its surrounding communes by providing a more affordable and reliable electricity service. The incorporation of cheaper renewable energy power into the system provides an opportunity to significantly reduce energy costs, which may stimulate economic growth and job creation in the area.

The construction of these solar plants will be implemented by the Ministry of Finance Technical Operating Unit (UTE/MEF), with technical support from the State energy regulator, Autorité nationale de régulation du secteur de l’énergie (ANARSE) and the Ministry of Public Works, Transport and Communication (MTPTC).

Pierre Michel Joassaint, Director General of UTE, says: “Thanks to the solar power plant, electricity costs will drop significantly, and the PIC will become more competitive. This should help attract new tenants and create more jobs in the park. UTE also expects the tariff to decrease for customers in surrounding communities, providing the opportunity to expand the grid and increase access to electricity in the region.”

residents of Caracol and the surrounding communities.”