Home Page d'accueil | News & Events | Statement by U.S. Ambassador Peter F. Mulrean Upon the Arrival of the First Airlift Flight Of Relief Materials for the Victims of Hurricane Matthew 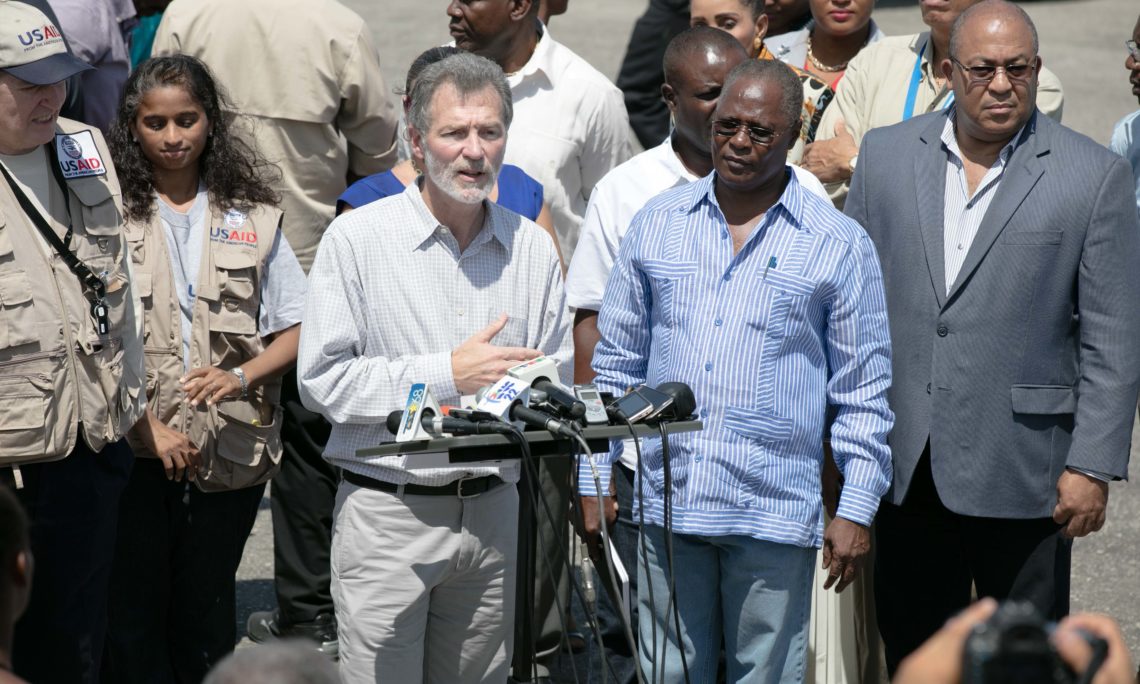 I am honored to be here with Provisional President Privert for the arrival of the first shipments of humanitarian relief supplies from the United States.  What you see behind us is one of five 747 cargo plane deliveries of more than 480 metric tons of supplies to help an estimated 100,000 people. I accompanied Provisional President Privert on a flight over the affected areas in the southwest on Wednesday.  What we witnessed was devastating – houses, public buildings, roads, crops and trees damaged or destroyed by heavy rains, wind and flooding.  We will be traveling to Jeremie this afternoon to look at conditions on the ground in one of the hardest hit cities.

The effect of Hurricane Matthew on Haiti is catastrophic.  The United States is deeply saddened by the growing number of fatalities.  I would like to stress the important role that the Government of Haiti played to ensure that the number of casualties was not higher.  Its warnings and communication efforts urging people to evacuate to safer areas, and its provision of shelters saved many lives. Nevertheless, 1.5 million people have reportedly been affected by the hurricane and 350,000 are in need of immediate assistance.  Our general assessment is that priorities for immediate assistance are food, water and sanitation, emergency shelter, and critical health care for communities, particularly in the regions of Grand’Anse and Sud.

My colleague, and great expert on disaster response, Tim Callaghan from USAID’s Office of Foreign Disaster Assistance, is the leader of our Disaster Assistance Response Team, which numbers nearly 50 experts in all aspects of relief.  We are also benefiting from the unique capabilities of the US Department of Defense to help support efforts.  A Joint Task Force led by Rear Admiral Pringle has been established to support Tim’s team to deliver critical supplies and humanitarian personnel to areas cut off by the storm.  The Joint Task Force is already providing nine helicopters and military personnel.  The US Coast Guard is also providing both sea and air assets to support relief efforts.

The Government of Haiti is leading the humanitarian response effort and the United States is committed to supporting Haiti’s plan and we are working in full coordination with the Department of Civil Protection.  Our two countries are partners and share a long and deep friendship.  The efforts of the United States today and in the coming weeks and months are a natural manifestation of that friendship.