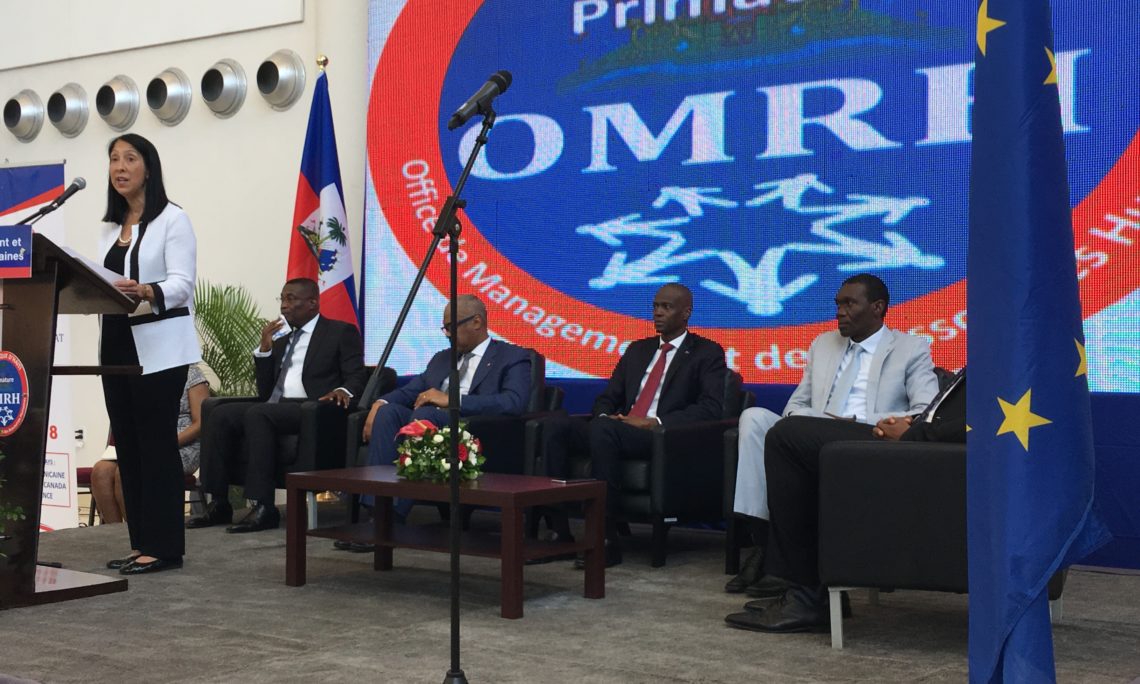 I am honored to participate in this opening ceremony of the International Forum on State Reform.

Today, I am pleased to be able to join you not only in my capacity as Ambassador of the United States of America, but also on behalf of the group of Technical and Financial Partners, or TFP Group, working on state reform, led by our international development Agency, USAID, in Haiti.

I would like to congratulate the Haitian Government for taking the initiative to organize this forum to discuss important governance issues with representatives from the full spectrum of Haitian society.

We hope that these two days together will allow the exchange of ideas and draw on international experiences of state reform.

His Excellency the President of the Republic of Haiti made state reform a pillar of his campaign and his presidential mandate.

We have also seen the Haitian government prioritize state reform through the Prime Minister’s Declaration on Public Policy; the Roadmap delivered by the Prime Minister to the OMRH General Coordinator, Dr. Josué Pierre-Louis; and the action plan and dashboard that OMRH has made public, outlining priority actions to improve state performance and better serve the Haitian people.

Today’s forum marks a new milestone inaugurating a conversation that will culminate in a new State Reform Framework for Haiti, known as the Programme-Cadre de Reform de l’Etat, or PCRE III, piloted and coordinated by Haitian leaders.

The TFP Group would like to acknowledge the leadership of Dr. Pierre-Louis, who has made sure that the process of drafting this framework will be truly Haitian-led and Haitian-owned.

On behalf of the TFP Group, I want to reiterate our collective commitment to partner with you in this effort.

The state is the crucial link between political will and public action.

A state must function well to effectively serve its people.

All nations need to develop strong state institutions with a modern, efficient, impartial civil service, and a public administration that serves its citizens and the public interest.

That is why the TFP Group stands by Haiti in this mission and is committed to listening and offering support.

For the PCRE III to be successful, we all, partners and members of the Government of Haiti, must continue to support the leadership of OMRH and provide them with the adequate human, financial, and material resources they need to achieve their goals.

Furthermore, the objectives of the PCRE III must be achievable, the resources behind it must be proportionate to the magnitude of the task, and it must be broken down into annual work plans with measurable indicators.

Of course, state reform concerns not only the central public administration, but also the local regional and municipal administrations, which are most closely connected to their constituents.

It is therefore our hope that the PCRE III will incorporate priorities and interventions related not only to central government reform, but also to local governance.

In drafting the PCRE III, you have the opportunity to consolidate existing strategies of local governance as well as to increase the provision of social services by establishing a local civil service.

A civil service at the local level would be a big step forward in making local government more accessible to citizens. It is an important component of decentralization, which can be a development driver for Haiti.

Mr. President, I know that you are very interested to make sure that we all – partners and Haitian citizens – are working together on the seven priorities of your administration, which include the goal of reforming the state and prioritizing results-based management.

The TFP Group shares your goal of building the capacity of the civil service, and we will continue to support you in setting up information and human resource management systems that will make Haiti’s institutions more transparent, consistent, and efficient.

The TFP Group welcomes regular dialogue with the government on the topic of state reform; the opportunity to support OMRH in organizing today’s forum being an example.

This partnership framework would explicitly align donor activities with the government priorities listed in the PCRE III, consistent with the Paris Declaration on Aid Effectiveness.

A modern civil service, central state administration, and local governance network are essential elements of our common vision, and we are committed to continuing to work with you, and most importantly, in line with the vision of the Haitian government and Haitian people.

I thank you for the opportunity to speak on behalf of the TFP Group, and I wish you every success.