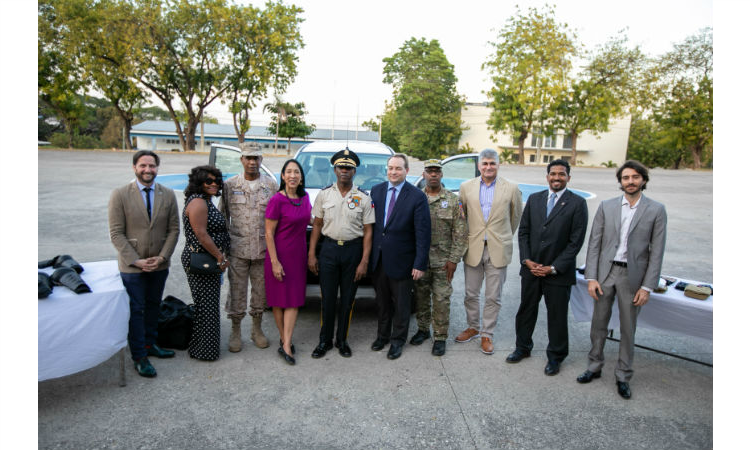 I am pleased to be here for this important ceremony to hand over essential equipment and vehicles to the Haitian National Police, in particular the crowd control, counter-narcotics, and border units (CIMO, BLTS, and POLIFRONT).

I am here today with INL director for the region,  Mr. Patrick Ventrell, and we also have the State Department’s Director of Haitian Affairs, Mr. Apar Sidhu, with us this afternoon.

The United States has supported the police academy; we have funded the construction of police stations and sub- stations; we have provided professional exchange and training opportunities, and we have provided equipment to several Haitian National Police units.

I was on the border at Ouanaminthe and at Malpasse over the past few weeks, where we meet POLIFRONT and BLTS teams. The BLTS works to make sure that the scourge of drug trafficking does not undermine the rule of  law in Haiti. Director General Normil, I congratulate you on the exemplary work of the Haitian National Police under your leadership.

The interest of the United States in strengthening the rule of law in Haiti remains strong. The presence of my colleagues Patrick and Apar at this ceremony underlines the American government’s partnership with Haiti. A strong and capable police force ensures that Haitian citizens can exercise their democratic rights and live in peaceful and prosperous communities.  Peace, stability, and the rule of law are essential for Haiti’s political and economic development. This requires well-trained and courageous police, and we understand that these officers

need the right equipment to do their job. I am sure that the Haitian National Police officers will make good use of this equipment to  accomplish their mission of protecting and serving the Haitian people.