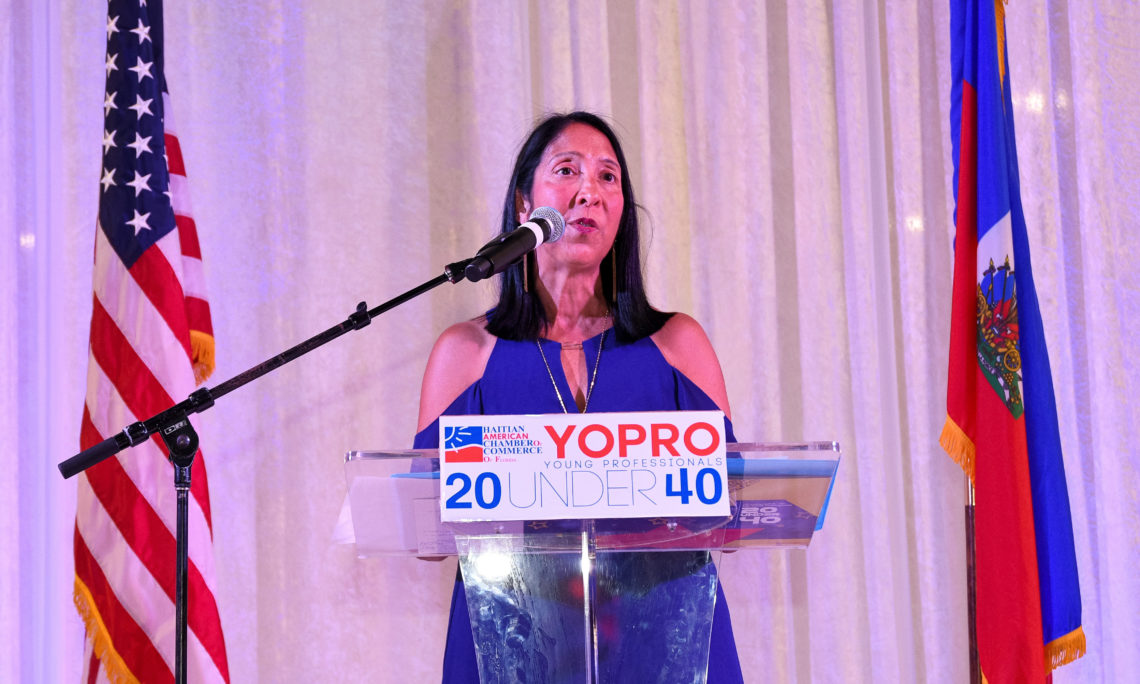 Thank you for that kind introduction, Delle, and it is a pleasure to be with you here tonight.

To the YoPros, I have read your bios, and you all are amazing!

I congratulate each of the “20 under 40” for their varied professional accomplishments and strong civic engagement. I’m really pleased to join the audience here tonight to honor you.

And to all HACCOF members: I admire your engagement, mentoring, and dedication in recognizing the accomplishments of these outstanding young professionals.

I also admire the great work that HACCOF and your sister Haitian-American Chambers are doing to promote partnerships and alliances within communities throughout the U.S. and Haiti to build healthy business climates, foster investment opportunities, create employment growth, and encourage public and private sector collaboration in both countries.

I want to give a shout out to AmCham Haiti members who have traveled from Port-Au-Prince to join us here tonight, as well as Ayiti Community Trust.

Although I’ve spent my career as a U.S. diplomat with the U.S. Department of State, I want to share with you my own connection to the family of American Chambers of Commerce. During the summer between my first and second years at university, I was an intern at the U.S. Chamber of Commerce in Washington, D.C. in the International Affairs Division.

This Division of the U.S. Chamber of Commerce is a strong advocate for free enterprise, competitive markets, and rules-based trade and investment worldwide. Clearly, this approach remains the path to opportunity and prosperity for all of us around the world.

During that Chamber of Commerce internship so many years ago, I also saw the powerful role that the U.S. Chamber and American Chambers of Commerce play in advocating for the private sector and encouraging economic growth — and as I embarked on my career with the U.S. State Department, I never forgot that experience.

Just a few years after that internship I came to Haiti as a young U.S. diplomat on my first overseas assignment, 1982-1984. My career has now come full circle back to Haiti, where I’ve served as the U.S. Ambassador since February of this year.

Back in June, Secretary of State Pompeo spoke about how economic diplomacy remains a vital element of our national security. And I believe, just as you do, that pro-business trade and investment policies spur economic growth, both here in the United States and in Haiti.

I would like to take a few minutes to share some of our observations from the U.S. Embassy in Port au Prince, as well as our priorities with regard to our partnership with Haiti.

We recognize, of course, that Haiti requires a growing and dynamic private sector working across both agricultural and non-agricultural value-chains to achieve sustainable, long-term economic development — including increased rural and urban employment, economic and food security, and prosperity.

It is also critical that Haiti increase domestic resource mobilization and invest in basic services for the Haitian people such as healthcare and education. One of our key goals at the U.S. Embassy is to encourage Haitian self-reliance and resiliency through a variety of U.S. government efforts.

The U.S. works with the Haitian government to strengthen Haiti’s institutions in order to increase government revenue streams so that Haiti can one day design, finance, and lead its own development, as well as decrease the country’s reliance on international donor assistance.

For example, we are assisting Haiti’s municipalities to mobilize domestic resources through USAID’s Civitax – Lokal + project.

Through this program, ten municipalities switched from paper-based methods of public finance management to a computerized system called CIVITAX, which led to an average of 56 percent increase of property tax and business license revenues from 2013 to 2017.

In some municipalities, revenues increased within this period of time by more than 500 percent. These municipalities were then able to offer services to their citizens such as trash collection or street repairs.

In addition, through USAID’s Customs Support project, the United States is providing funding to modernize the Haitian customs service processes for revenue collection, traveler processing, and contraband interdiction, as well as providing joint training to both Haitian and Dominican customs agents.

These domestic resource mobilization efforts are key cornerstones for Haiti’s future economic growth. I recently traveled to the border at Ouanaminthe to see how this was working, as well as to look at investment in north and northeastern Haiti. There are impressive manufacturing facilities in the North and Northeast at Caricol and Codevi. I was able to see first-hand how the local communities in the north and northeast benefit from U.S. legislation designed to spur Haiti’s economic growth.

This legislation has been instrumental in the redevelopment of Haiti’s apparel industry, which accounts for over 90 % of national export earnings and provides over 50,000 jobs, while ensuring that core labor standards are respected.

But donor support to help Haiti meet its development and broader economic and social needs is not enough – Haiti also needs increased domestic and foreign investment. Our partners in Haiti are working to create the business-enabling environment needed to attract private investment.

We’re also working to change the model we employ in our development projects to focus on private sector growth. The next phase of our USAID support in this regard is the Haiti-INVEST initiative.

This multi-million dollar project was just launched last month. It is designed to facilitate financing for investment in agriculture and other priority areas over a four-year period.

The project will utilize business advisory services to identify and prepare a pipeline of financing requests from small-and medium-sized Haitian enterprises.

This in turn will catalyze local access to finance, a key factor in stimulating increased investment. My USAID colleague Fanny Florimon-Reed is here tonight and would be happy to talk to those interested in learning more about Haiti-INVEST.

Many of the business people we talk to also point out that to increase both foreign and domestic investment, the Haitian government also needs to improve the ease of doing business in Haiti, including by strengthening contract enforcement and contract inviolability.

It’s clear that Haiti’s long-term development requires a foundation of political stability, economic growth, and adherence to the rule of law. For this reason, our work on rule of law issues and justice sector reforms also continue through a variety of USAID and State Department programs.

As you are aware, a new Haitian Prime Minister and cabinet are expected to take office soon, as the Chamber of Deputies’ session is ongoing tonight.

One of the first points I intend to make to the new team is that there has never been a stronger case for fair, open and transparent government strengthened by a strong and independent judiciary. But as valuable as the American partnership and support is, the greatest of Haiti’s assets is its people.

A strong education system and improved access to health care are thus also critical to Haiti’s development, and these are also priority areas for our U.S. partnership with Haiti.

Over the coming years, the U.S. Government seeks to work closely with the Government of Haiti to build on past achievements and to work together as partners toward a more stable, prosperous, and democratic future for the American and Haitian peoples.

We’d also like to partner with all of you – “20 under 40,” HACCOF, sister Haitian-American Chambers, AmCham Haiti, and Ayiti Community Trust – to deepen our U.S.-Haiti partnership.

Over the summer, the Government of Haiti launched Alpha Haiti and participated in the Haiti Tech Summit.

Representatives of U.S. firms such as Google, Microsoft, Cisco, Master Card, and others advocated for efficiency and accountability through practical business applications at these events. Several of these leading business representatives also happened to be proud representatives of the dynamic Haitian-American diaspora who were willing to share their experiences as entrepreneurs in the United States.

At the U.S. Embassy, we’ve worked hard to reach outside of the capital to share best business practices and technology information transfer to local entrepreneurs throughout Haiti, often with generous donations of time and expertise from the Haitian–American diaspora.

For example, we hosted our first Tech Camp in Les Cayes this past April, and we’re now putting in place plans for a second Tech Camp this fall.

These efforts allow us to underscore to the Haitian audience that small and medium-sized businesses serve as the backbone for economic growth around the world.

And these are precisely the businesses that need mentorship and an infusion of knowledge-sharing from successful entrepreneurs such as yourselves to scale up to the next level.

In June, we also supported 25 local entrepreneurs from throughout Haiti to participate in the Haiti Tech Summit, which provided them exposure to international businesses and the media. We had over a dozen business leaders from the diaspora providing one-on-one mentoring to these impressive young entrepreneurs in a start-up lab.

But there is so much more to do.

That’s why HACCOF’s announcement of its new alliance with other Haitian-American Chambers of Commerce throughout the country is such great news! I would like to give a big shout out to the Georgia and Utah Haitian American Chamber of Commerce representatives here with us tonight.

Together, you are a strong force that can shape the Haitian-American partnership for years to come. As I know you agree, there’s no substitute for building a broad-based professional network.

Just last week, the Embassy sent our third cohort of young Haitian entrepreneurs on the “Young Leaders of the Americas Initiative,” a program in which young Haitian leaders interact with counterparts from across the region and are then paired with those engaged in similar businesses across the United States.

So I want to emphasize that you –as business leaders and as members of the diaspora – have an important role to play in building the Haitian-American partnership of the future. We look forward to welcoming your engagement, insights, and ideas.

All of you here tonight are truly catalysts for change, and we want to join with you in creating this positive change.

Congratulations, and thank you again for inviting me to this wonderful celebration of Haitian-American partnership.