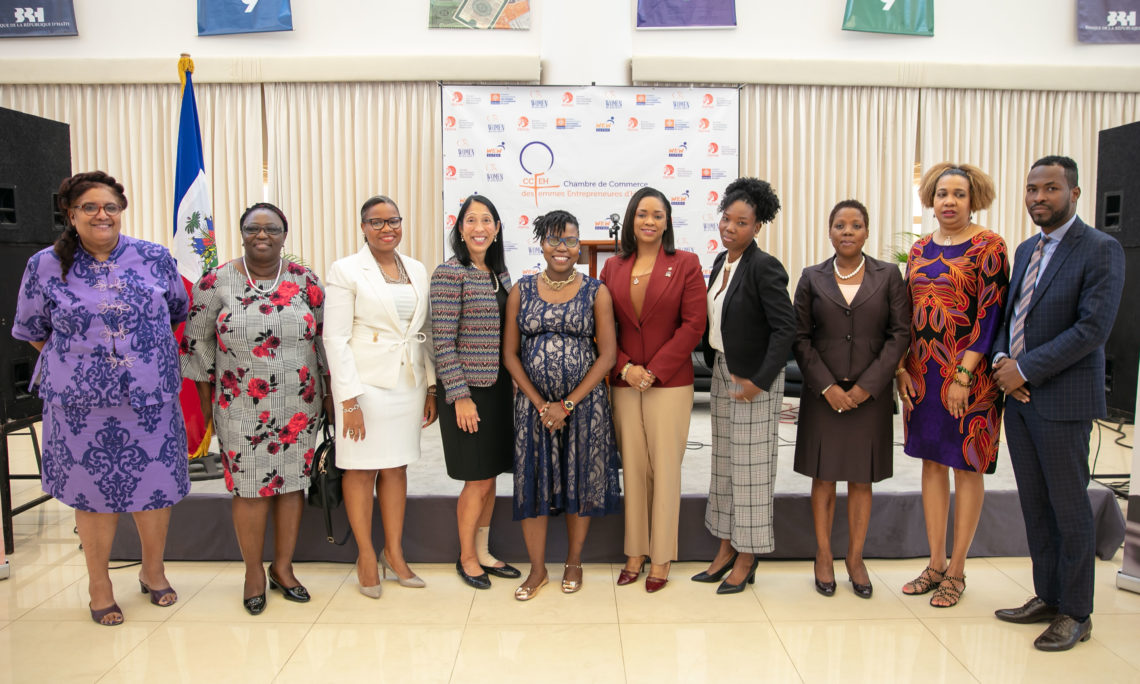 Director General of the Bank of Haiti;

Representative of UN Women in Haiti;

It is a pleasure to be with you here today.

These important dialogues are truly a path for women to grow their own businesses, create prosperity in their communities, and learn best practices which will support Haiti’s prosperity.

And to all CCFEH members:  I really admire your engagement, and dedication in bringing together information resources and tools from the Central Bank and others in the economic and commercial sectors.

These exchanges and networks will serve not only your members but all business people in Haiti interested in serving as engines of economic growth.

I also admire the great work that CCFEH is doing to promote partnerships and alliances within communities throughout Haiti to enhance healthy business and investment climates, increase the ease of doing business, and encourage public and private sector partnerships.

As noted recently by  U.S. Assistant Secretary of State for Business and Economic Affairs Mrs. Manisha Singh, women make up more than half of the world’s population, but only 40 percent of the global labor force.

Closing the global gender gap in labor markets could increase worldwide GDP by as much as $28 trillion by 2025.

$28 trillion dollars – think about that for a moment. We simply cannot afford not to have women participate fully in the global economy!

But in the U.S., while this trend is moving in the right direction, women-owned businesses still grow at a slower rate and earn less revenue than male-owned firms.

The U.S. Senate Committee on Small Business & Entrepreneurship recently produced a study to try to understand the underlying reasons for this gender gap.  We know that there is nothing that women cannot achieve if given an equal  opportunity to compete. I hope this conference contributes to thriving networks that find ways to help women entrepreneurs succeed.

We at the U.S. Embassy recognize the importance of including women in every facet of Haiti’s economic growth strategy.  In fact,  under the USAID Leveraging Effective Application of Direct Investments (LEAD) project, we provided financial and technical assistance to 21 Haitian female entrepreneurs, all of whom are still operating successfully. It’s been shown that unequal access to startup funding and financing streams leave women with fewer credit options and a small portion of venture capital.  We need to work together to change this.

And during U.S. Secretary of State Pompeo’s most recent trip in the region just last week,  he highlighted, and I quote: “We are one region. There’s so much good that we can do together. We can build economies, create jobs and wealth …all across the region. If there is one message, it would be our continued economic cooperation in ways that benefit each of our countries.”

And thus we work daily at the U.S. Embassy to put this policy into action on the ground in Haiti with dynamic entrepreneurs and economic and business leaders such as yourselves.

I would like to take a few minutes to share some of our observations from the U.S. Embassy in Port au Prince, as well as to outline our priorities with regard to our partnership with the Haitian people.

We recognize, of course, that Haiti requires a growing and dynamic private sector working across both agricultural and non-agricultural value-chains to achieve sustainable, long-term economic development — including increased rural and urban employment, economic and food security, and prosperity.

It is also critical that Haiti increase domestic resource mobilization and invest in basic services for the Haitian people such as healthcare and education, as Mrs. Sandra Beauvil from UN Women and Mrs. Stephanie Auguste, Deputy Minister just mentioned.

The U.S. works with the Haitian government to strengthen Haiti’s institutions in order to increase government revenue streams so that Haiti can improve its ability to design, finance, and lead its own development, as well as decrease the country’s reliance on international donor assistance.

For example, we are assisting Haiti’s municipalities to mobilize domestic resources through USAID’s Civitax – Lokal + project.

Through this program, ten municipalities switched from paper-based methods of collection of local taxes to a computerized system called CIVITAX, which led to an average of 56 percent increase of property tax and business license revenues from 2013 to 2017.

In addition, through USAID’s Customs Support project, the United States is supporting the modernization of the Haitian customs service processes for revenue collection, and contraband interdiction, as well as providing joint training to both Haitian and Dominican customs agents.

In our opinion, these domestic resource mobilization efforts are key cornerstones for Haiti’s  future economic growth.

In August, I traveled to the border at Ouanaminthe to see how this was working, as well as to look at investment in north and northeastern Haiti.

There are impressive manufacturing facilities in the North and Northeast at CARACOL and CODEVI, and women are well-reflected in the workforce there.  I was able to see first-hand how the local communities in the north and northeast benefit from U.S. legislation designed to spur Haiti’s economic growth.

This legislation has been instrumental in the redevelopment of Haiti’s assembling apparel industry, which accounts for over 90 % of national export earnings and provides over 50,000 jobs, while ensuring that core labor standards are respected.

Yesterday, in the Haitian Times Press, there was an article entitled “First Of Its Kind, Women-Owned Factory Creates Sustainable Jobs In Haiti.” It was about “Deux Mains”, a factory launched and managed by women.

We understand the CCEFH membership has specific interest in how to qualify to benefit from this legislation. We have brought additional fact sheets with us today to share more details about how to become a qualifying producer and how to request earned import/export allowance certificates.

We’re also working to change the model we employ in our development projects to focus on private sector growth. The next phase of our USAID support in this regard is the Haiti-INVEST initiative.

This new project- Haiti-INVEST- will facilitate access to foreign and local capital for growing small and medium enterprises in priority sectors such as agriculture.

I am also pleased to announce that USAID’s Global Development Lab welcomes applications for its Development Innovation Ventures grants.  This opportunity offers a tiered funding model for innovations that demonstrate evidence of impact, cost-effectiveness, and a viable pathway to scale growth.

But as valuable as the American partnership and support is, the greatest of Haiti’s assets is its people.

As  I mentioned, a strong education system and improved access to health care are  critical to Haiti’s development, and these are also priority areas for our U.S. partnership with Haiti.

Over the coming years, the U.S. Government seeks to work closely with the Government of Haiti to build on past achievements and to work together as partners toward a more stable, prosperous, and democratic future for the American and Haitian peoples.

We rely on partnerships like our relationship with the Women’s Chamber of Commerce, our hundreds of exchange program alumni, and AmCham Haiti to deepen our U.S. – Haiti partnership.

There are a number of exciting developments I’ve witnessed since I arrived in Haiti as U.S. Ambassador in February of this year.

For example, over the summer, the Government of Haiti launched Alpha Haiti and participated in the Haiti Tech Summit.

At the U.S. Embassy, we’ve worked hard to reach outside of the capital to share best business practices and technology information transfer to local entrepreneurs throughout Haiti, often with generous donations of time and expertise of our program alumni.  Many of these alums are in fact successful women.

For example, we hosted our first Tech Camp in Les Cayes this past April, and we’re now putting in place plans for a second Tech Camp.  These efforts allow us to underscore to the Haitian audience that small and medium-sized businesses serve as the backbone for economic growth around the world.

And these are precisely the businesses that need mentorship and an infusion of knowledge-sharing from successful business women and entrepreneurs such as yourselves to scale up to the next level.

In June, we also supported 25 local entrepreneurs from throughout Haiti to participate in the Haiti Tech Summit, which provided them exposure to international businesses and the media.

But there is so much more to do. Together, you are a strong force that can serve as the engine of Haiti’s economy for years to come. As I know you agree, there’s no substitute for building a broad-based professional network and mentoring the next generation to reach even greater heights.

We look forward to the return of our third cohort of young Haitian entrepreneurs on the  “Young Leaders of the Americas Initiative,” a program in which young Haitian leaders interact with counterparts from across the region and are then paired with those engaged in similar businesses across the United States.  As we gather here this morning, these Haitian entrepreneurs are meeting now with Secretary Pompeo and others at the U.S. State Department.

There is no doubt that by exchanging business experience, and combining data driven economic models with the rich expertise you bring through years of developing products and services tailored to the needs of the Haitian people, you are contributing to Haiti’s future success.

Together, we hold the keys to the prosperity of both our great nations. Women – and the ideas they pursue – are the next frontier for entrepreneurship around the world, which is why both our nations’ leaders must understand the challenges and foster a society that supports women’s successes.

We need to acknowledge the unique obstacles for women entrepreneurs – and tackle these issues: the need for more role models, the gender pay gap and unequal access to financial capital.

These factors can prevent women-led businesses from reaching their full potential.  But today, I know you’ll be sharing not only your analysis of the challenges but also sharing women’s economic success stories and positive outcomes.

In the U.S. the recent American Small Business study noted that individuals with mentors are 5 times more likely to say they are planning to start a business, and that 62% of high school girls who are mentored on technology are likely choose it for a major in college.  We see that small business owners who have access to mentoring report higher revenues and growth rates the U.S., as well. There are other interesting findings on women’s entrepreneurship out there.  For example, the  National Women’s Business Council in the U.S. has noted that women have been 32% more successful at raising capital through crowdfunding than men, and that incubator and accelerator programs can work to level the playing field for women to network.

Today’s economic forum is a good news story: as more business women speak out about their challenges and successes. I thank you for the opportunity to speak at the second annual Economic Forum, and wish you all continued success in the forum.