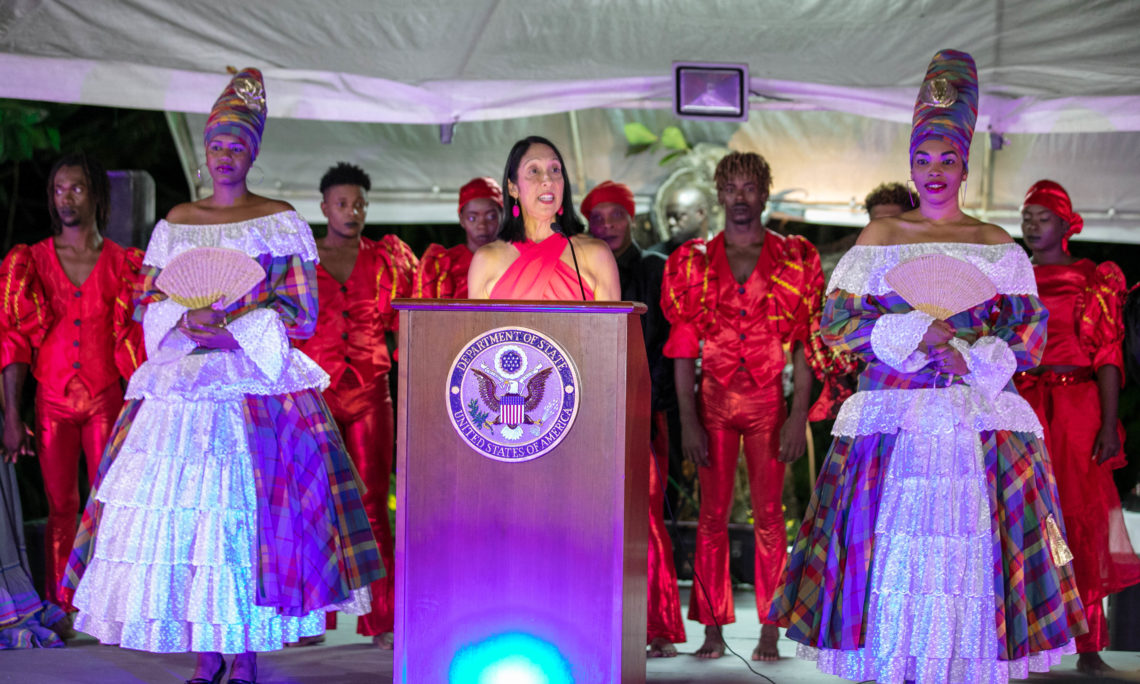 I am pleased to welcome you to the launch of this very special time for us at the U.S. Embassy — “Black History Month” — this entire month of February.  Tonight, I would like to start with a quote that reminds us of the reason we are here:  “Those who have no record of what their forebears have accomplished lose the inspiration which comes from the teaching of biography and history.”

These words were written decades ago by Carter Godwin Woodson, a highly-regarded American historian who was also an author, journalist, and founder of the Association for the Study of African American Life and History.

Indeed, we are here tonight to reflect upon the many accomplishments of  African Americans in the United States, and to be inspired by these accomplishments.  “Black History Month” is a time during which we honor the achievements of African Americans and the contributions they have made to the United States since the founding of our nation. We take this moment to reflect on the ways in which African-Americans pushed boundaries, demonstrated excellence, and led civil rights movements, holding the U.S. true to our ideals.

What makes “Black History Month” important to us is not just about remembering historic figures; it is also about bringing together different communities in order to see more progress, more inclusiveness. In 1976, on the occasion of the bicentennial of the United States, this Black History commemoration, which had been just one week long, became a month-long celebration. And durig our 1976 bicentennial, President Gerald Ford urged Americans to “seize the opportunity to honor the too-often neglected accomplishments of black Americans in every area of endeavor throughout our history.”

I’m proud to continue this tradition here in Haiti with my colleagues from the U.S. Embassy, ​​and with all of you here.  We know that Haiti has also pushed boundaries and overcome adversity. Haiti has also demonstrated excellence.  Haiti led not only freedom movements but also a revolution — a revolution that played a major role not only in the trajectory of the United States, but also in that of the entire world. Thus, the celebration of “Black History Month” here in Haiti has special meaning for the Americans here this evening. We recognize the powerful influence that the independence of Haiti – the world’s first Black nation – has had on the history of the United States and far beyond. We want to continue to celebrate these ties between our two nations, Haiti and the United States.

The story of the founding of Haiti – from a slave rebellion to the creation of a republic based on democratic principles – is a testament to what people can achieve when they are committed to working together for the greater good.  This commitment to working together for the greater good must continue. There is an expression in Creole, “Ayiti twò rich pou l pòv .”  That is to say, Haiti is too rich to be poor. And indeed, this country, Haiti, with its rich history and culture, most move forward to ensure the well-being of its people.

Haiti was founded on the ideals of freedom and democracy. The government and stakeholders must reengage to support these ideals for the well-being of the Haitian people, with frank dialogue, a government committed to serving its people, and free and credible legislative elections in the near future.  By adhering to these democratic principles, Haiti will return to its roots, and renew its commitment to its founders.

Once again, I would like to give a round of applause to the superb Erol Josué, Director General of the National Bureau of Ethnology, and his troupe! I would also like to thank Falodia, our amazing “rara” group, which will play for us in a moment, as well as Venise Laplante and Esther Bernard, from the magnificent dance troupe “Boukoulou. ” You all have done an extraordinary job of highlighting the richness of Haiti’s culture and history this evening.

In Washington, DC, during” Black History Month” we typically see a wide range of programs and activities launched at our Library of Congress, the National Archives, the National Art Gallery, the Smithsonian, and other well-known institutions, all of which come together to pay tribute to African American contributions to our nation. Similarly, here in Port-au-Prince, we are launching a wide range of programs and activities to celebrate “Black History Month.”

Last week, we celebrated at the superb PAPJAZZ festival. Indeed, it was a kind of prelude to “Black History Month.”   Haitian musicians like Eddy Francois and Belo took the stage, accompanied by American artists like Dee Dee Bridgewater and Jazmin Ghent. They all showed how the universal message of jazz, a genre created within the African American community in the United States, is now part of our history that share with Haiti and around the world.

And beyond PAPJAZZ, beyond this reception tonight, we invite you to continue celebrating with us this month. On February 8, come experience the story of Konpa and come dance with us and the Konpa Bazilik group. On February 14, come and learn about the importance of historically Black colleges and universities in the United States. On February 22, come and taste African American cuisine with us. Please see Kedenard Raymond this evening for any additional information relating to these activities.

In closing, I would like to thank my fantastic colleagues from the U.S. Embassy, not only for organizing the event tonight, but also for planning all the activities that will take place throughout the month of February.  A big thank you to Kedenard Raymond, Cassandra Annie Francois, Byrum Stevens, Ashley Bordner, Jean-Pierre Richard Jr., Regine Jean Francois, Diane Audant, Shellon Jonas, David Mosby, Levida Hardy, Jacques Etienne, Mark Mock, Khwanda Moore-Davis, Mariama Keita, Grace Mann, and Gigi Dupuy.