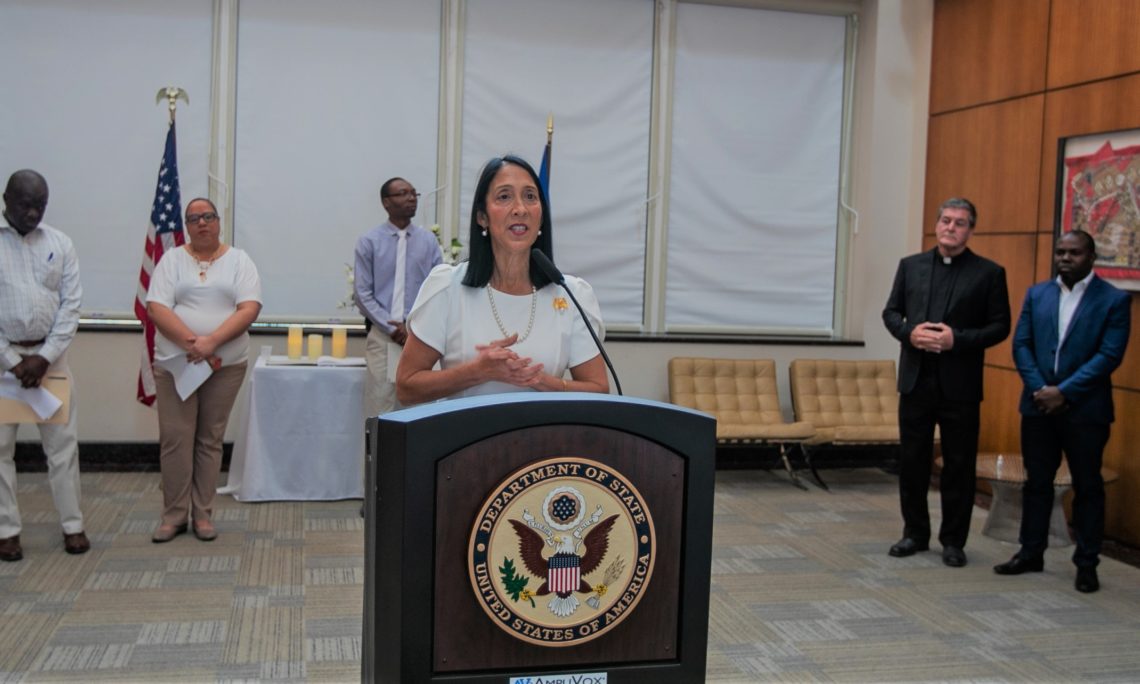 Remarks by Ambassador Sison at the U.S. Embassy ceremony to commemorate the 2010 Earthquake and Colleagues Lost
January 10, 2020

Thank you, Father Rick, for that beautiful benediction.

Today, we begin the solemn remembrance of that fateful day, on January 12, 2010 when the earth shook, and the Haitian people suffered unimaginable, immeasurable losses.

Ten years on, we remember and honor all who were affected.

I want to thank our Locally Engaged Staff (LES) Committee for organizing today’s remembrance ceremony, especially Annie and Richard, and I want to speak first to our wonderful LES colleagues and our Haitian friends.

On behalf of our Embassy, I cannot begin to express our deepest sympathies for what you and your families endured and the loss –  the pain —  that you surely continue to feel even today.

For many of you, the grief, anger, and frustration that you felt may be as strong today as it was ten years ago.

For those of us who were not in Haiti at the time of the earthquake, it may be difficult, impossible, to comprehend the sheer magnitude of the devastation: 230,000 dead; so many children orphaned; so many families bereft; countless displaced; countless homes destroyed; and an entire country in shock.

I was at our U.S. Embassy in Lebanon when the earthquake happened here in Haiti, and I remember my disbelief that landmarks I’d known from my earlier posting here had collapsed, were gone.

The great landmark of the National Palace, and the Port au Prince Cathedral at which we’d celebrated a marriage of an LES colleague and a young vice consul  many years ago had collapsed, and Haiti’s landscape, Port au Prince’s landscape, was forever changed.

Ten years on, we remember.

It is in the spirit of solidarity that we are gathered here today with our Haitian colleagues.

We know that on this coming Sunday, January 12, Haitians here and all over the world will reflect on what that day means to them.

On Sunday, I trust that you will be with your families, with your friends, hugging your loved ones tightly, and remembering those who perished.

Dear colleagues, please know that the United States, stands with you and stands in solidarity with Haiti.

Here at U.S. Embassy Port-au-Prince, we are not just a mission, not just an Embassy community, we are also a family.

And because we are family, we must take a solemn moment to remember and recognize those we lost that day.

We lost Victoria Delong, our Cultural Affairs Officer, as well as Dr. Richard Bruno, our retired Regional Medical Officer who had served in the Foreign Service for 21 years and was here volunteering for Food for the Poor.

Our extended family also lost Baptiste Wyllie, the wife of Andrew Wyllie, and their two children, Evan and Laurence.

We honor them, and we uphold their memory.  And we know that our Haitian colleagues, our LES family, lost so many more relatives and friends.

We also recognize the efforts of the survivors, so many of you here, who displayed extraordinary dedication in one of the largest relief efforts ever undertaken.

The first responders were the U.S. Coast Guard District 7, arriving in Port-au-Prince on January 13 to spearhead relief efforts, followed by the United States Navy hospital ship COMFORT, which made record time arriving three days later to provide medical care to victims. Our responders came from CDC, as well.

And they all relied on the tireless support and coordination of our Embassy staff – all of you –to mobilize much-needed resources and personnel for the relief effort.

The Consular Section, and the American Citizen Services section in particular, overcame tremendous challenges and worked around the clock to support the evacuation of tens of thousands of people. Our colleague Dominique Gerdes, who you will hear from in a moment, won the 2010 Department of State Foreign Service National of the Year award for her leadership in the evacuation.

Dominique and her team managed much-needed translations, emergency visa processing, urgent adoptions, and even arranged for stocking the overcrowded consular waiting areas with food and water in the days and weeks afterwards.

And we’re happy this afternoon to welcome back Carolyn Veit, our recently-retired Embassy registered nurse,  who won the 2010 Marjorie Yamamoto Harwood award for nursing excellence during the earthquake.

The way that Carolyn saved lives, tended to the wounded, and comforted so many during the period after the earthquake can only be described as heroic. Despite being struck and injured by concrete herself, Carolyn managed emergency medical treatment for Embassy staff, Haitian and American alike, as well as for several American citizens, neighbors, and diplomats from other countries. And of course, Dominique, Carolyn, and the many others in our Embassy family did this amazing work when they weren’t sure that their own family members were safe. They did this as they were still processing the devastation around them.  They did this as they grieved.

I thank our locally Engaged staff on behalf of the United States, from the bottom of our hearts. Know that whether it is one year, or ten years after, there is no expiration date on our gratitude.

Former Ambassador to Haiti Kenneth Merten and former Deputy Chief of Mission David Lindwall have also spoken poignantly about their experiences during the earthquake to me.

Of course, they praised the compassion and resourcefulness they found working alongside Haitian colleagues.  Ambassador Merten stated, “I will forever be proud of how the Embassy community – both Haitian and American – reacted that day and every day for many months to help the Haitian people and the Haitian government react, recover, and begin to rebuild after the Western Hemisphere’s most devastating urban natural disaster ever. I would like all to know that I think of you and those we lost every day. I know many of you  suffered greatly from personal and financial loss and ten years is not enough to erase the memories of lost loved ones.”

And former DCM David Lindwall also wrote me this week to express his shock and sadness that ten years had passed; it is hard to believe.  He also expressed his shock and sadness at the untimely death of our late olleague Kettly Lafontant Jean-Baptiste on January 3, remembering that, “Kettly was there every day after the earthquake despite the needs of her own family.  She brought food (great pumpkin soup) to Ken Merten and me almost every day …”

As we all know, Kettly was like that, always kind, and always lending a helping hand throughout her 39 years of service at our Embassy.

And to our USAID and USAID/OFDA implementing partners who have joined us here today, know that the United States could not have accomplished what we did in the days, weeks, months, and years following the earthquake, without your tireless support, hard work, and commitment.

St. Luke’s Foundation, the American Red Cross, Catholic Relief Services, Global Communities, GOAL, International Organization for Migration, UNICEF, World Vision, and the World Food Programme were on the ground and on the frontlines facilitating and supporting our unprecedented “whole of government” U.S. response.

As part of these efforts, we deployed six search and rescue teams that rescued 136 individuals.

With U.S. contributions, the World Food Programme immediately began food distribution, ultimately providing emergency food relief for nearly four million people in the first three months after the earthquake. Our USAID’s Water and Sanitation project (WASH) worked quickly to coordinate water trucks, and restore Port-au-Prince’s water system so that up to 1.3 million people were getting treated water daily by April 2010, and so that more than 11,500 latrines and 25 water systems were installed.

We cleared more than 2.7 million cubic meters of rubble, and constructed over 600 semi-permanent classrooms, so that students  could return to school.

Lastly, approximately 1.5 million Haitians were displaced as a result of the earthquake, triggering the creation of over 1,000 spontaneous settlement sites.

Our partners at the International Organization for Migration rose to the challenge of protecting the homeless forced to live in camps and helping them  to find long-term housing solutions. These IOM efforts complemented USAID’s Cash-for-assets program, which employed more than 350,000 people (about half of whom were women) in the first year after the earthquake through short-term, cash-for-assets jobs, injecting more than $19 million dollars into the local economy.

We know that Haiti faced  enormous economic and political challenges, even prior to the earthquake, particularly as a nation facing serious poverty.

Our program today is meant to mourn and  honor all that was lost, and all those who were lost, on that fateful day a decade ago. But the best way to honor the memory of those lost on January 12, 2010 is to keep building a Haiti that we can all be proud of.

And as U.S. assistance in Haïti continues to work towards building a stable, prosperous and secure Haïti, we know that progress can only be achieved through Haïtian-led, nonviolent, and democratic solutions.

It has been a long road since 2010, and at times a frustrating one, but the battle continues and the Haitian people, especially the next generation, play the most important role.

We must all commit to working together to ensure that the sacrifices of those who perished on January 12, 2010 is not forgotten. Let this mark the beginning of the next ten years, and commit to making this next decade one of true progress.

Thank you and God Bless you.