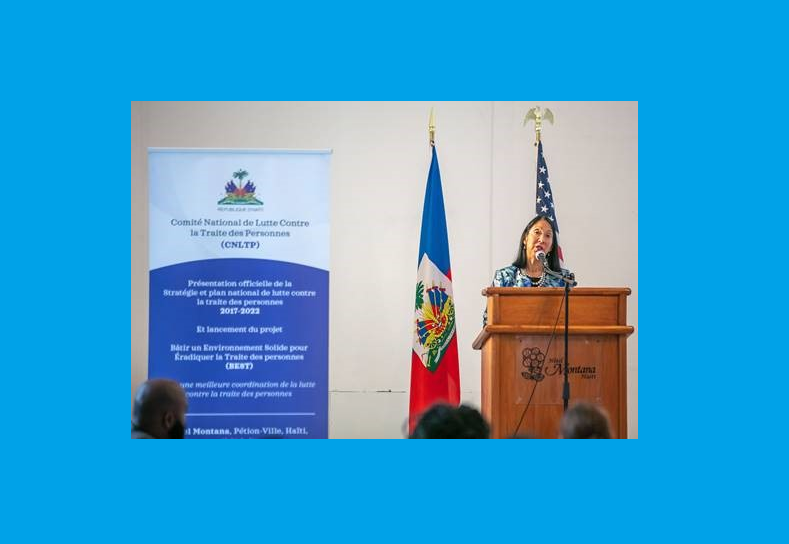 Good morning and thank you for being with us today for the official launch of the Haitian government’s National Action Plan against trafficking in persons and of USAID’s Project BEST (Building Enduring Systems to end Trafficking in Persons) implemented by the Lumos Foundation.

However, despite the increased efforts to combat trafficking, much work remains to be done. Haiti remains a source, transit, and destination country for trafficking in persons both domestically and transnationally.  There is also the serious issue of “restavèk,” where an estimated 286,000 children are currently subject to domestic servitude.  We need all actors, including government ministries, the judiciary, police, the National Anti-Trafficking Committee, and civil society to commit and redouble their efforts to combat trafficking in Haiti.

As U.S. Secretary of State Mike Pompeo said during his recent speech at the launch of the 2019 Trafficking in Persons Report, “human trafficking is not a natural disaster, it is caused by man.  And therefore, we have the capacity to solve this.”  That is why we are pleased to see the Government of Haiti’s National Action Plan against Trafficking in Persons, which will guide Haiti’s counter-trafficking efforts until 2022.  The action plan, once sufficient resources are allocated, will move Haiti forward on the path to eliminating all forms of human trafficking.

To aid in this endeavor, we are launching today USAID’s Project BEST, a four-year $5.6 million project implemented by the LUMOS Foundation, which will support the Haitian government to better coordinate counter-trafficking initiatives at both the national and departmental levels.

I also congratulate Project BEST’s implementing partner, the Lumos Foundation. I would like to introduce the Project’s Chief of Party, Eugene Guillaume, and Patrick Camille, the Deputy Chief of Party for the project.  I believe that this collaboration between USAID, LUMOS, the government of Haiti, and the many civil society organizations engaged in this fight will produce very positive results in the fight against trafficking in persons in Haiti.

Project BEST is launched in support of Haiti’s National Action Plan and we invite other partner governments and organizations to launch similar initiatives in support of these anti-trafficking efforts.

We would also like to recognize the important role played by the media in bringing to light the abhorrent circumstances of trafficking.  Investigative reporting and reporting on how the perpetrators are being held accountable is important in raising public awareness of this scourge.  Over this past year we have noticed an uptick in reporting on these matters; this media attention serves an important role in facilitating discussion of on this topic.

However, I would like to reiterate that the Haitian government, including law enforcement and the judicial sector must take the lead in the fight against trafficking in persons.   I strongly encourage the Haitian government to make the necessary financial and technical resources available to support the implementation of the National Action Plan and reinforce the National Anti-Trafficking Committee (CNLTP).  Technical assistance is only a small part of the fight against trafficking; continued political will and sustained dedication from the government are also vital.

We encourage the Haitian government to vigorously investigate, prosecute, and convict human traffickers and to dedicate adequate budgetary resources to fund the national action plan.  We also urge the government to provide the needed resources for services for trafficking victims in its next national budget submission.

We also note that l’Institut du Bien-Etre Social et Research (IBESR), the government’s social welfare agency, and the Office de la Protection du Citoyen (OPC) play a key role in providing services to victims and raising awareness of trafficking in persons. It is important that these government institutions also have adequate financial resources to continue and expand their important work.

With our combined efforts supporting a Haitian-led process, we can succeed in eliminating human trafficking here in Haiti.

Thank you all for being here.