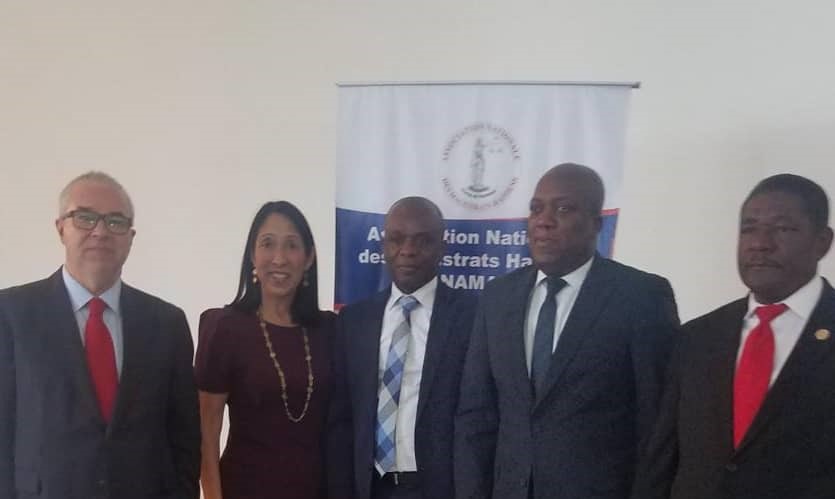 I am so pleased that this workshop and exchange of best practices is taking place, not only for Haiti’s justice sector, but for larger efforts to combat corruption throughout Latin America and the Caribbean.

I want to thank the representatives from the Justice Studies Center of the Americas for their participation and the expertise from regional leadership:   Mr. Sebastian Hamel Rivas from Chile, Former Minister of Justice of Chile Mr. Jaime Arellano, and Former Prime Minister and Minister of Justice Jimenez of Peru.

The critical anti-corruption efforts in Latin America, especially initiatives such as the establishment of a special anti-corruption court in Honduras,  which has handled cases against parliamentarians and other key political figures, shows us what has and can be done in the fight for transparency and combatting corruption.

Thank you also to the Haitian Judges Association (ANAMAH) for organizing this forum.

We are all aware that a judicial system that does not operate in complete independence opens the door to corruption and is incapable of effectively prosecuting corrupt actors.

Justice without professional ethics limits access to justice, promotes impunity and deters public confidence in the fairness and objectivity of these decisions.

In this regard, a recent study funded by USAID and carried out by the Haitian NGO Diagnostic and Development Group (DDG), in collaboration with Arizona State University (ASU), revealed that 90% of the population prefers to resolve their conflicts outside the formal judicial system.

Instead, people rely on religious, community ASEC and CASEC leaders — and even gang leaders in some urban areas.

Because they believe the justice system is too slow, expensive and corrupt.

Article 11 of the United Nations Convention against Corruption, signed and ratified by Haiti, requires states to adopt measures to enhance integrity and prevent opportunities for corruption within the judiciary.

To this end, the efforts of the Haitian government, with the support of the United States Government, has established a Certification Commission for Magistrates (CTC) and a Judicial Inspection Unit at the High Judicial Council (CSPJ).

Corruption, in all its forms and outlets, halts development; it is a disincentive to economic growth and stalls our collective efforts to end extreme poverty.

Last year, Haiti ranked 161 out of the 180 countries measured on Transparency International’s latest Corruption Perception Index, the lowest ranking in the region.

Good governance and building institutions with integrity are crucial to the success, well-being, and long term sustainable development of the entire region.

The US government continues to support transparency and accountability in Haiti.

In 2016, the USAID KONEKTE program helped strengthen the investigative capacities of the Government of Haiti’s Anti-Corruption Unit so that it can investigate corruption cases through information gathered via a Haitian government database that the Ministry of Finance and Economy uses to process budget requisitions made of government of Haiti agencies.

In the judicial sector, the United States government has worked with the Superior Council of the Judiciary (CSPJ) and Ministry of Justice and Public Security to develop an evaluation and career plan for judges and prosecutors, respectively.

These assessment processes are necessary to avoid arbitrary promotions and revocations.

Similarly, we have contributed to the development of a draft law intended to offer prosecutors more autonomy, in order to avoid undue influence of executive and legislative powers.

The establishment by the CSPJ, the Ministry of Justice, and the MJPS, with the support of USAID, of the Computerized Management System of Judicial Cases (GICAJ) within the courts clearly demonstrates the political will to increase the efficiency and transparency in the judiciary.

We have seen that the introduction of such a system in other countries, such as Costa Rica, has also reduced public perception of corruption.

Despite all these efforts, others are needed to fight corruption in the justice sector.

Like ANAMAH today, the professional associations of magistrates, clerks, notaries and bailiffs must be proactive in combating corruption within their organizations.

The School of Magistrates, Bar Associations, and law schools should guarantee rigorous recruitment processes without nepotism.

Professional ethics must be at the forefront of their training curricula.

Civil society organizations should also participate in the fight against corruption within the justice sector by serving as watch dogs.

To that effect, the US Government through USAID’s Justice Sector Strengthening Program notes the recent issuance of a request for proposal which will allow a civil society organization to perform court monitoring.

These participants have also benefited from a series of trainings on the prosecution of corruption offenses.

It is up to each magistrate, every lawyer, every clerk, every bailiff and every notary to show independence, impartiality and integrity.

These values, ​enshrined in the principles of judicial conduct recognized by the United Nations, are above all an individual responsibility.

A legal professional is required under all circumstances to maintain his or her  sense of duty and ethics in honor of the oath he or she has taken before peers and fellow citizens.

We thus, continue to urge the government to step up its efforts in the fight against corruption.

These efforts include the reinforcement of the rule of law and the strengthening of good governance.

I want to reiterate my gratitude to ANAMAH for not hesitating to tackle a delicate issue such as corruption.

Likewise, I welcome the presence of experts from the Justice Center of the Americas (CEJA) who will share with us good practices developed in Latin America and the Caribbean to promote the independence and accountability of the judiciary, encourage individual integrity and the more effective application of the law and the protection of the judiciary against political interference.

The US government reiterates its commitment to promoting strong rule of law to lead to greater respect for human rights.

We will continue to support your efforts in this regard.