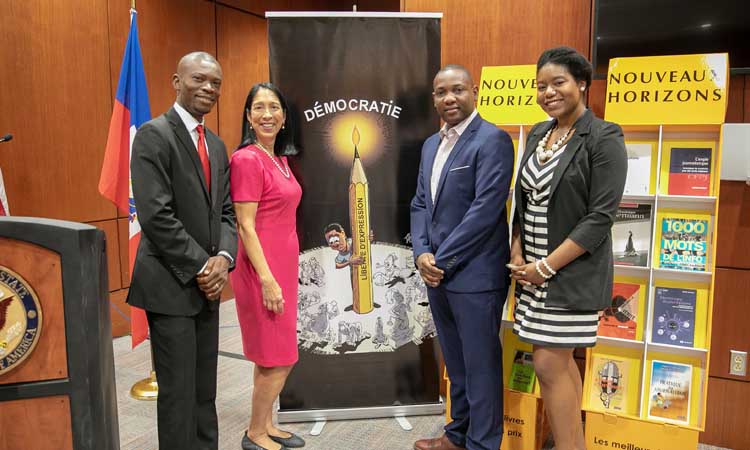 I would like to welcome you to the U.S. Embassy as we commemorate World Press Freedom Day. But before I begin, there are several individuals I would like to acknowledge.

First, I want to recognize Robenson Sanon for his participation today.  Mr. Sanon you have touched on several key points for this embassy and for the Haitian people: the need to combat violence, the need to strengthen the rule of law, and the need to say “no” to impunity.  I must also recognize Mr. Sanon, Josué Belamour, Frantz Cineus, and countless other Haitian journalists for their continued courage in reporting.  I also want to specially acknowledge Madame Fleurette Legagneur in recognition of the life and work of her husband, journalist Vladimir Legagneur.

I would also like to acknowledge the presence of Radio Kiskeya and note that we are so impressed by how the vibrant Haitian media community, supported by their loyal listeners, demonstrated their resilience in rapid fundraising to restore Radio Kiskeya as strong and vibrant as ever after the recent fire.

Thank you everyone for being here today.

This year, the relationship between the press and democracy will be the main theme: “Media for Democracy: Journalism and Elections in Times of Disinformation.”

This special day celebrates the fundamental principles of press freedom, assesses the state of press freedom throughout the world, defends the media from attacks on their independence, and pays tribute to journalists who have lost their lives in the line of duty.

As we all agree, free press is a key element of any true democracy.

As members of the press, you all have a critical role to play in making Haiti’s democracy work.  You serve as truth tellers.  As you inform citizens, you also help them to develop opinions on the fundamental political, economic, and social issues affecting their lives.

However, as you know, reporting in Haiti requires more than just keeping people informed.  By providing people with timely and accurate information, you empower them. You help to give citizens a voice.

You give citizens the tools they need to engage and to advocate for real, lasting change. Your work drives important dialogue; helps to promote civic engagement, builds up institutions, educates, and helps societies to thrive.

Now you don’t need me to tell you that as noble as this work is, it is not easy.

This past year, your efforts bolstered those fighting against corruption, and those demanding accountability. As you worked to promote human rights and even protect lives, many of you risked your own.

Here at the Embassy, we recognize and commend those efforts, and we remain committed to supporting Haiti’s free press as part of a priority to strengthen democratic governance, resilience, and the safety and security of all Haitians.

For example, in January of this year, our Press Office conducted a training led by U.S. based media expert Yves Colon with journalists from around Haiti on how best to report before, during and after a crisis.

And this summer, the press office will send journalists to VOA Headquarters in Washington D.C. to participate in a training on the role of media in good governance and holding elected officials accountable.

Lastly, in the face of the increasing challenges such as disinformation, our Public Diplomacy Section has supported the Association of Online journalists for the creation of T-Check, which provides online fact-checkers for public policy speeches. We are even more pleased to note that they are not alone doing this work in Haiti as online fact checking service TOMA and many of you verify facts on a daily basis.

Other offices in our Embassy are also invested in supporting Haiti’s press corps. USAID, through Groupe Croissance, supported the work of Haiti’s first economic journalists association of which some of its members are here today. And through our Justice Sector Strengthening Program, also known as JSSP, USAID helps to support the enhancement of investigative journalism in Haiti.

The United States is a committed partner to Haiti, and as ardent supporters of freedom of the press,  we stand with you on World Press Freedom Day and every day.  In addition to celebrating your work and networking with each other today, we also ask that you reflect on your role in upholding democracy.  It is an incredible responsibility and one that should make you proud.