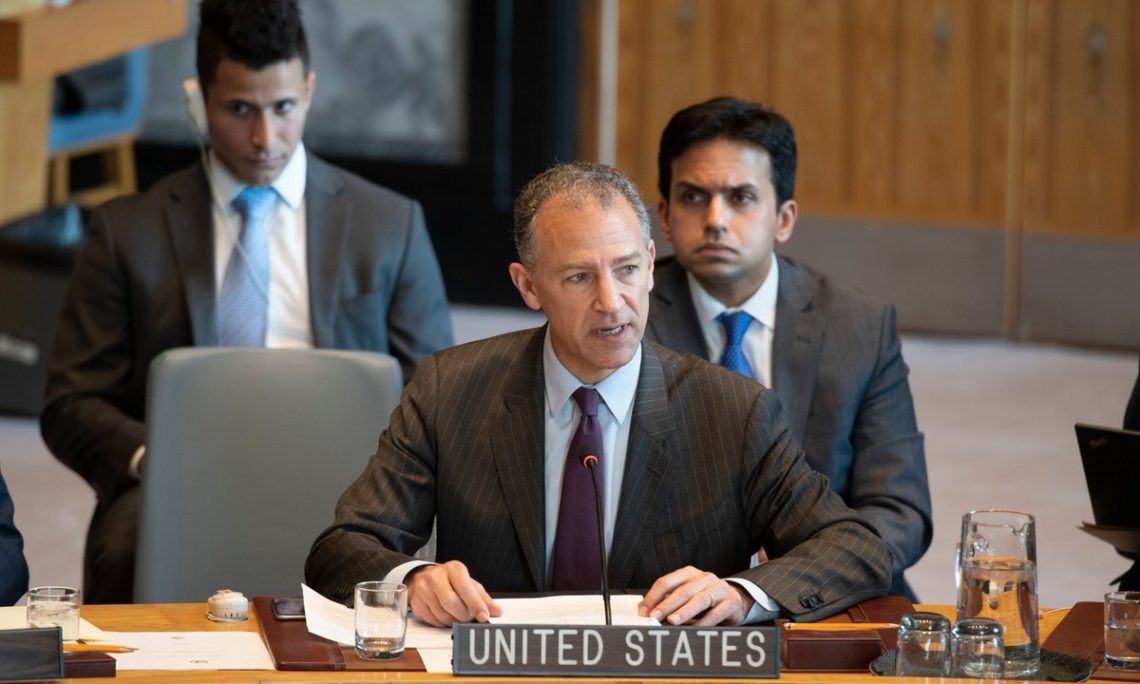 Thank you, Mr. President, and I’m glad to be the first subjected to the hourglass test.

We would like to thank Foreign Minister Edmond for joining the Council today. The United States welcomes this opportunity to address human rights not only in Haiti, but in the broader context of peacekeeping operations.

Promoting respect for human rights, as embodied in the Universal Declaration of Human Rights, is a central goal of our foreign policy. The protection of human rights helps secure peace, deter aggression, promote the rule of law, combat crime and corruption, strengthen democracies, and prevent humanitarian crises.

The United States has just released our Annual Country Reports on Human Rights for 2018. When we document human rights issues, we shine a spotlight on the plight of victims and show our commitment to expose perpetrators. Through ongoing monitoring and exposure of human rights challenges, we use our influence and power to help promote human rights and fundamental freedoms, and to effect change by governments and societies.

In Haiti, Mr. President, we’ve seen positive change. The Haitian National Police have taken steps towards imposing systematic discipline on officers found to have committed abuses or fraud. As we’ve stated on several occasions, the HNP can further increase its effectiveness by increasing accountability and transparency.

And as we note in our human rights report, there have been improvements in the still very problematic, prison and detention conditions. We also note the progress made in filling positions in Haiti’s judiciary.

Mr. President, the United States welcomes Haiti’s progress in promoting respect for human rights and we commit to continue working with the Government of Haiti to further address the country’s significant challenges. These include: isolated allegations of unlawful killings by police, excessive use of force by police, arbitrary detention, harsh and life-threatening prison conditions, a judiciary subject to corruption and outside influence, physical attacks on journalists, widespread corruption and impunity; and human trafficking, including forced labor.

MINUJUSTH has a central role in promoting human rights. Its task to strengthen national human rights institutions is essential to promoting the rule of law, democratic institution building, and security in Haiti. It contributes to ensuring accountability, as well as respect for human rights, including for women and children.

Mr. President, last month, the Secretary-General provided an assessment of where the UN and Haiti stand with achieving MINUJUSTH’s goals and benchmarks, and the dashboard is, as always, a very helpful tool in seeing this. We agree with his assessment that Haiti is on a positive trajectory, with improvements in the professionalism and efficiency of rule of law and security institutions, as well as in the protection of human rights. We also agree that the HNP has been increasingly self-sufficient in providing security across the country.

This brings me to the upcoming transition, as we prepare for the final renewal of the MINUJUSTH mandate. We look forward to continued updates from the Secretariat regarding the Secretary-General’s recommended follow-on Special Political Mission so that the Council can establish the SPM in a timely manner and ensure a smooth transition. The SPM should include a human rights pillar that can further advance progress achieved by MINUJUSTH on human rights benchmarks. In the interim, we expect the Government of Haiti, together with MINUJUSTH, to keep working towards achieving the benchmarks until the drawdown of the mission and beyond.

We expect a renewal of MINUJUSTH’s mandate for six months until October 15, 2019. This timetable is consistent with the two-year exit strategy and the assessment of the Secretary-General.

As his March 1 report states, “unless there are mounting challenges to the government’s capacity to respond to the crisis, the HNP will be able to fully assume responsibility for security and protection of Haiti by 15 October 2019.” The United States shares this assessment, and notes that it reflects the will of the Government of Haiti to conclude the peacekeeping operation by that time.

Mr. President, we do not believe this Council should link MINUJUSTH’s scheduled transition to legislative and local elections in Haiti scheduled for October 2019. Rather, the United States encourages the Government of Haiti in support of its election planning.

In this broader context, we encourage the President of Haiti and elected representatives to work together, in accordance with Haiti’s constitution, to form a new government to serve the Haitian people as soon as possible. We continue to support a constructive and inclusive dialogue among government leaders from across the Haitian political spectrum, civil society, faith-based organizations, and the private sector to find lasting solutions to the current political and economic crisis.

Mr. President, we’re convinced that genuine dialogue and compromise, leading to a transparent and accountable government, can best serve the needs and aspirations of the Haitian people.