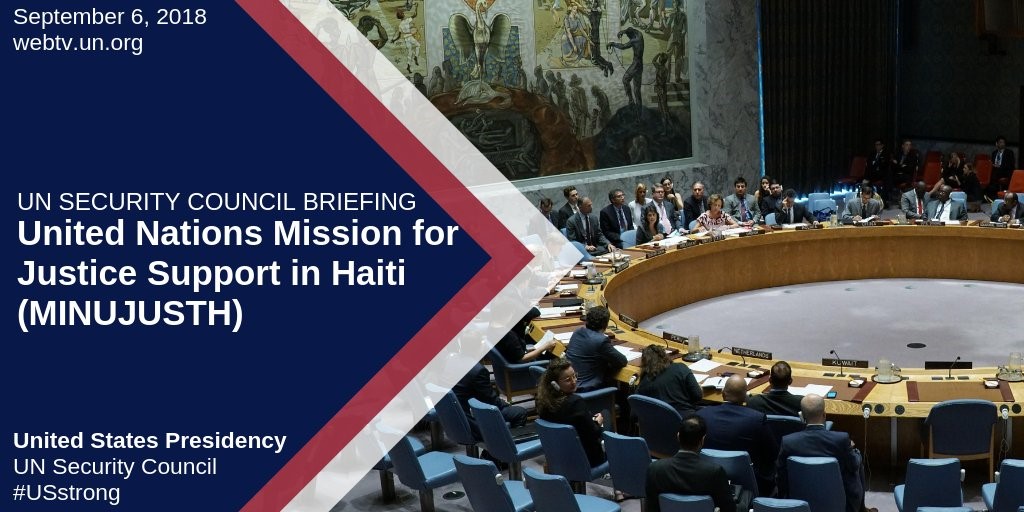 Thank you for your briefing, Assistant Secretary-General Keita, and for the very helpful graphics that you distributed today. We warmly welcome Helen La Lime and wish her every success with her new mission. We look forward to continued progress from MINUJUSTH along with its roadmap toward the planned drawdown of operations by October 2019.

This past July represented a critical test for both the Government of Haiti and for MINUJUSTH, with both the Haitian National Police and the UN Formed Police Units confronted violent protests and riots.

During a time of political instability, the Haitian National Police, with the support of MINUJUSTH, acted to protect the civilian population and refrained from actions that would have further inflamed the situation.

These efforts prevented a prison break from the National Penitentiary, which would have made an extremely volatile situation in downtown Port-au-Prince even more complex.

The continued professionalization of the Haitian National Police demonstrates the progress made towards achieving the Mission’s exit strategy benchmarks and will make possible the on-schedule transition of tasks and responsibilities to the Government of Haiti, in coordination with the UN Country Team.

However, it’s essential to protect these hard-won gains, and MINUJUSTH has an important role to play before drawing down.

First, more progress must be made in the fight against corruption. No one should be above the law, and we call on the Government of Haiti to work with MINUJUSTH and the international partners to strengthen its justice sector institutions, including its anti-corruption bodies and to promote judicial reforms to combat impunity and strengthen the rule of law.

Second, it’s imperative that corrupt officials or any other individuals implicated in human rights violations be held accountable for their actions.

Third, we must also caution against the politicization of the police. The Government of Haiti must prioritize the continued development and professionalization of its national police and ensure the institution remains apolitical.

Finally, the Government of Haiti and its civil society and international partners must continue to address human rights concerns, such as those involving sexual exploitation and abuse, violence against women and girls, high rates of prolonged pretrial detention, and trafficking in persons.

While there is much to accomplish, we acknowledge the HNP’s steps to improve its response to public demonstrations and to reinforce its Inspectorate General to investigate reported police abuses, as well as progress made in advancing human rights activities through the Haitian government’s Office of Citizen Protection.

The United States looks forward to the scheduled transition to a non-peacekeeping UN presence in Haiti by October 2019 and the assumption of these responsibilities by the Government of Haiti. Thank you.