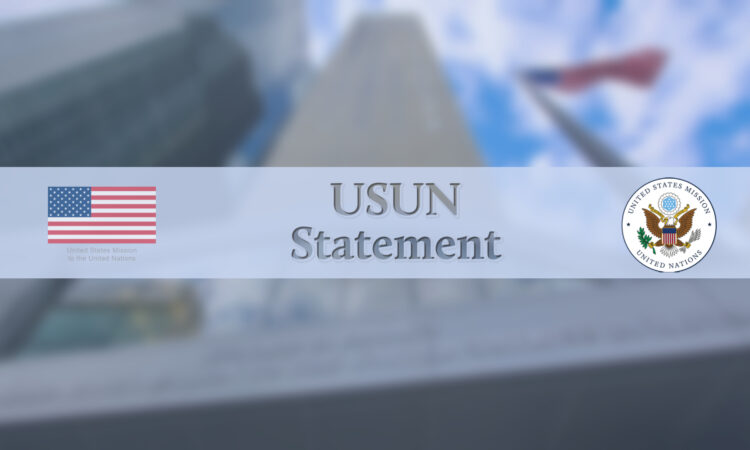 Thank you, Mr. President. And thank you, Special Representative La Lime, for your updates on the situation in Haiti, and for the extensive efforts and those of your entire team. Ms. Roc, thank you for your briefing, and for reminding us of the urgent need to focus on the challenges faced by Haiti’s young people. President Moise, we welcome you to the Council, and we appreciate your participation today.

Let me begin with something we all know: legislative elections were due in Haiti in October 2019. Both before and after that date, members of this Council repeatedly called on Haiti’s political stakeholders to come together, to set aside their differences, and to find a way forward to address Haiti’s most pressing challenges. They chose not to do so; however, ultimate responsibility for creating an atmosphere conducive to free and fair elections, and then conducting those elections, must rest on the government.

Once again, we urge the Government of Haiti to hold overdue legislative elections as soon as possible in order to restore the parliament’s constitutional role. The Haitian people deserve the opportunity to elect their leaders and to restore Haiti’s democratic institutions. While we recognize that an enormous amount of work remains to be done, 2021 must be the year of both legislative and presidential elections in Haiti.

At the same time, we applaud the Government of Haiti for its decision in September to increase the budget of the Haitian National Police, which has long suffered from a lack of resources. Despite this increased focus on law enforcement, however, as we’ve heard, gang violence continues to be a serious problem, as kidnappings rose by over 200 percent in 2020, and homicides are also on the rise.

We urge Haitian authorities to redouble their efforts to investigate and prosecute violent crime, including sexual and gender-based violence, to strengthen community policing practices, and to safeguard the human rights of residents of gang-controlled neighborhoods.

We are also troubled by an ongoing lack of accountability for human rights violations and abuses. In December, the United States sanctioned three former Haitian officials under the Global Magnitsky Human Rights Accountability Act for their role in the 2018 La Saline attack, in which at least 71 people were killed.

But La Saline, Bel Air, and the assassination of Monferrier Dorval in August all highlight the urgent need to end impunity, beginning with concrete actions to protect citizens from violence through effective policing and timely adjudication of criminal cases. The development and implementation of a national strategy for the investigation, prosecution, and adjudication of cases of serious crimes, with support as appropriate, is also worth considering.

The United States continues to encourage and promote the development of an independent, credible, and effective judicial sector in Haiti. We are concerned about executive orders undermining the judiciary and intermittent strikes by key judicial actors, which continue to negatively affect the functioning of the judiciary and limit the numbers of hearings and judicial proceedings held. A fully functioning judicial sector is essential to the tasks of taking on impunity and corruption, and to reducing endemically high levels of prolonged pretrial detention.

All of this takes place against the backdrop of an economic downturn in Haiti, further exacerbated by the COVID-19 pandemic. Economic instability, recurring fuel shortages, and acute food insecurity have combined to undermine progress towards development and worsened an already grave humanitarian situation.

On January 11, the United States announced an additional  $75.5 million in development assistance to Haiti. This new funding will be used to implement USAID programs in Haiti in a wide range of areas, including health, education, food security, agricultural development, water and sanitation, and governance. Together with the Government of Haiti, civil society, and our partners, we will continue working towards sustainable development and to help keep Haiti on the path to self-reliance.

Let me conclude by reiterating the need to bring the current period of rule by decree to a swift conclusion. It is only through the presence of a stable, democratic, and fully representative government that issues such as violence, corruption, and civil and human rights abuses can be meaningfully addressed.

The United States will continue to stand with Haiti as it builds a better future.