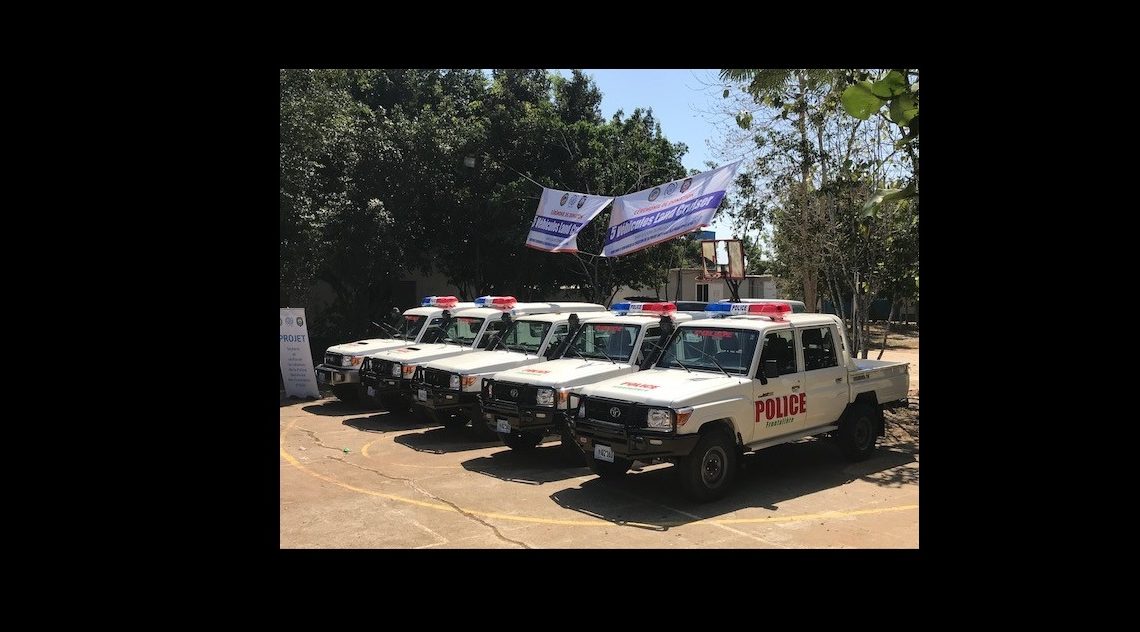 Cap-Haitian, March 12, 2018 – Today, the U.S. Government and IOM donated five vehicles and other materials to the Haitian National Border Police (POLIFRONT) to support the government of Haiti’s efforts to combat transnational crime and to increase security along its borders.

This ceremony was held at the POLIFRONT headquarters in Morne Casse in the presence of U.S. Ambassador to Haiti Michele Sison, the Inspector General of the Police, Joany Caneus, the Department Director of the police, Fritz Saint Fort, IOM Chief of Mission Fabien Sambussy, and personnel from the embassy’s Office of International Narcotics and Law Enforcement Affairs (INL).

Ambassador Sison was pleased to visit POLIFRONT as part of her first trip in the Northeast Department, and praised the IOM partnership in establishing the force. In her speech, she reiterated her commitment to continue to further US-Haiti cooperation for the police at all levels and recognized the importance of this newly created police unit that will lead to more security and stability in the country. “The challenges against transnational crime, including human trafficking and other illegal traffic must be addressed if Haiti wants to secure its borders.”

Through INL, the U.S. government actively supports the training and professional development of the Haitian National Police (HNP). This is the second donation to POLIFRONT and reinforces the United States’ commitment to working with the Haitian National Police in fighting transnational crime at the border. In October 2017, the United States donated motorcycles and all-terrain vehicles as part of a $645,000 contribution to IOM.