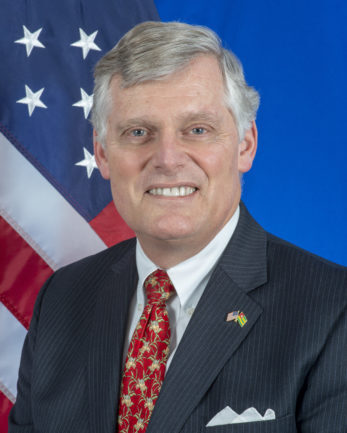 Ambassador Eric Stromayer assumed responsibility as the Deputy Chief of Mission at Embassy Port-au-Prince on July 3rd, 2022 and serves as the Chargé d’Affaires, a.i.  A career member of the Senior Foreign Service, class of Minister-Counselor, Ambassador Stromayer most recently served as the U.S. Ambassador to the Togolese Republic.  Other notable assignments during his 32 years in the Foreign Service include Acting Deputy Assistant Secretary for East Africa and the Sudans in the Bureau of African Affairs (2018-19), Executive Director of the Bureau of African Affairs (2014-2018), Management Counselor in Jordan (2011-2014), in Madagascar as Chargé d’Affaires, a.i. (2010-2011) and Deputy Chief of Mission (2008-2010).  He has also been posted in Hungary, Morocco, India, and Haiti where he began his diplomatic career.

Mr. Stromayer earned a B.A. from Northwestern University (1982) and a M.A. from Johns Hopkins SAIS (1986).  He is the recipient of numerous awards from the State Department.  Mr. Stromayer speaks fluent French, in addition to Haitian Creole, Italian, Hungarian, Wolof, and some Spanish. He and his wife have three daughters.