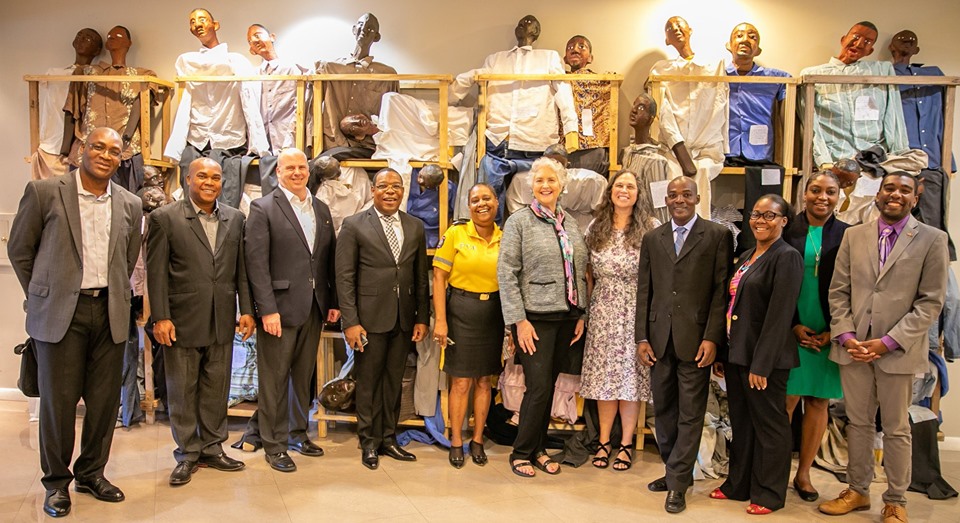 Distinguished current and former members of the Haitian government,

Experts from the University of California at Hastings,

Good morning and welcome!  It is a great honor for me to welcome you to this International Conference on The Future of Prisons in Haiti.  Transparent, fair, and efficiently run prisons are a critical aspect of any society. I think the key word is FAIR. Everyone says the world isn’t fair.  But it should be.  We – especially the judiciary – must always work towards being fair.  Potter Stewart, a Supreme Court Justice in the US, said, “Fairness is what justice really is.”  I love that!  I think it’s easier to relate to – and really feel – fairness than the lofty idea of justice.  Justice IS fairness.  Do you agree?

The fair treatment of prisoners is an important part of the justice system, and the measure of our commitment to individual human rights.  We all know, intuitively, when something seems fair so I think this formulation can help focus our efforts to achieve institutional justice.  Establishing a fair prison system in Haiti will ultimately enforce a strong, independent judiciary and deliver justice for all Haitian citizens.

I understand that over the course of the next three days you will explore, discuss, and debate the history, current state, and future of Haiti’s prison system with a particular focus on legal assistance rendered.  I congratulate the organizers and participants for taking into account Haiti’s unique history, while also identifying comparable legal procedure that can inform decisions about the future of Haiti’s criminal justice system.  While the focus of your conference is on the future of Haiti’s prisons, I believe it to be part of the broader goal of a fully functioning and transparent judicial system that serves all of Haiti.

Our priority in Haiti has always been to support Haitian-led efforts to strengthen democratic governance.  A transparent and fair judicial system that follows the rule of law is an important foundational element for achieving a strong democracy in Haiti.  From the predictable enforcement of business and investment contracts to ensuring that individuals receive fair treatment under the criminal justice system, the Haitian economy and society depend equally on a fully functioning and fair judicial system.

The United States government has long supported efforts to improve the rule of law in Haiti.  We have hosted discussions with l’Association nationale des magistrats haïtien ANAMAH to debate and discuss the need to modernize the judiciary. USAID has implemented 4 projects to strengthen rule of law in Haiti, including through the Justice Sector Strengthening Program (JSSP).  All include important provisions for ensuring access to justice for those who cannot afford to pay for lawyers.  USAID also works with the Ministry of Justice and Public Security on drafting the regulations used to implement the law and institution building.

Another example of how the U.S. Government supports judicial reform and rule of law in Haiti comes through the U.S. Department of State’s project, in conjunction with the American Bar Association and USAID, called Projustice.  Along with the JSSP, the U.S. Government has been working to assist Haitians in their quest to modernize the penal and criminal procedural codes. Nevertheless, adopting new penal and criminal procedural codes is the long term solution to the pretrial detention.

Recognizing that administration of justice in many less serious crimes by the indigent might be effectively managed through hands-on practical training of law students, the U.S. Embassy supported a two- way exchange between the College of Law in Jeremie University of California Hastings Law School.  The partnership helps law students in Haiti to gain practical litigation experience while representing economically disadvantaged detainees.  The law students in Jeremie are gaining valuable experience while being supervised by more experienced attorneys, and I’m pleased you will hear more about that work during this conference.

I’d like to pause here to stress something: our programs are focused on institution building and rule of law.  The examples I have cited this morning are examples of technical and financial assistance that we offer to help Haiti establish a fair, transparent, and corruption-free judicial system that serves all Haitians.  (There’s that word again!) I’m glad that you will have a discussion on the history of Haiti’s prisons is because I believe any successful penal system in Haiti will of necessity be a Haitian-specific system.  We stand ready to offer technical and other assistance but strongly believe that judicial and penal reform must be a Haitian-led process with solutions specific to Haiti’s own history and context.

Before I close my remarks, I would like to highlight this morning the issue of pretrial detention in Haiti.  In a country where 80% of the population lives below the poverty line and the national pre-trial detention rate reaches 72%, it is imperative that any discussion about the future of Haiti’s prison system include serious and evidence-based solutions for reducing unnecessary pre-trial detention.  Financial and educational poverty mean that detainees do not have the necessary financial resources to secure adequate representation nor do they know their rights.

Adopting new penal and criminal procedural codes is part of the long term solution to the pretrial detention, and we appreciate the efforts of all the members of the Bar, Magistrates, JSSP and other organizations to contribute to the full vetting and discussion of the drafted codes which await adoption by the Senate.    The U.S. Embassy appreciates the effort that JSSP, MINUJUSTH, and the Ministry of Justice made last year in developing a plan to combat pretrial detention.  We call on the Haitian Government to do two things: work towards implementing that plan and allocate funding for legal assistance for the indigent.

I’m sure that many of you are concerned about the high rates of pre-trial detainees in Haiti.  Prolonged pre-trial detention is one of the major contributing factors of overcrowding in Haiti’s prisons.  Prison overcrowding strains prison resources, which results in malnutrition and related illnesses, breakouts of preventable diseases, and a lack of proper detainee supervision.  And it isn’t fair! This is a concern that we regularly note in our annual Human Rights Report and as I noted above, we have funded efforts to mitigate this.  USAID funds the non-profit organization “Health Through Walls” to provide health prevention and care services, focused on infectious diseases such as HIV/AIDS and TB.

You may have noted that I have mentioned “enforcement” several times when talking about the rule of law.  It is not enough to pass the right laws and have the right regulations.  Laws and regulations must be enforced and done so in a way that respects both the letter and the spirit of the law.  THAT is what makes it fair.  We are proud of our work to help Haiti professionalize its national police over recent decades and are confident that these efforts contribute positively to Haiti’s independent judiciary.

In closing, I congratulate you for hosting and participating in this important conference, especially given the current difficulties.  I also look forward to the outcomes from the discussions and urge you to remain involved after the conference concludes.  I’d like to emphasize the word OUTCOMES.  Having a conference with no plan of action is just a bunch of people sitting around talking.  Anyone can do that.  We need YOU to take action, develop a plan, and implement that plan to increase justice – and fairness – for Haiti.

The United States Government will continue to support Haitian efforts to build strong institutions that serve the Haitian people and provide the foundation for sustained economic and social growth.  As part of broader judicial reform, tackling the important problems that exist within Haiti’s prison structure will contribute to Haiti’s well-being.  And fairness for all of its people.