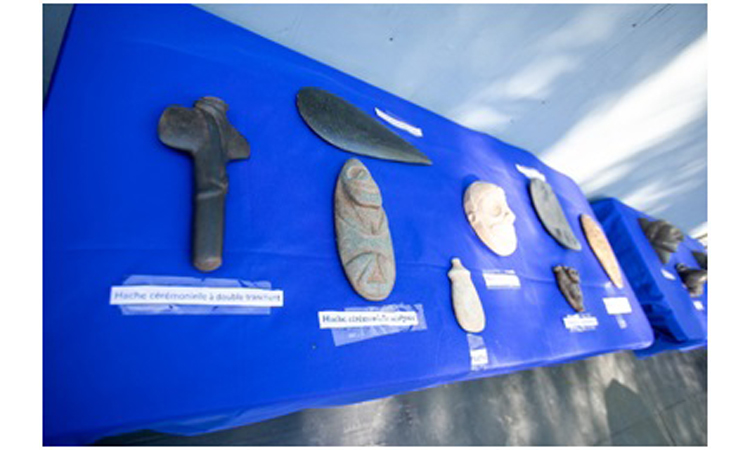 On Friday, February 14, 2020, U.S. Ambassador to Haiti Michele Sison joined Haitian Prime Minister Jean Michel Lapin, and Director General of the Haitian Bureau of Ethnology Erol Josue in a ceremony to repatriate 479 cultural and historical artifacts to the Republic of Haiti.

The Haitian artifacts were discovered in the largest single recovery of culture property in the history of the U.S. Federal Bureau of Investigations (FBI);  this is the first such repatriation of cultural patrimony from the United States to Haiti. To commemorate, representatives from the FBI Art Crime Team, the U.S. Embassy in Port-au-Prince, the U.S. Department of State Bureau of Educational and Cultural Affairs, U.S. Department of State Bureau of Western Hemisphere Affairs, and Haiti’s Ministry of Culture and Communication gathered at the Bureau of Ethnology in Port-au-Prince.

In her remarks, Ambassador Sison noted that, “Today, we celebrate the vital role that the rule of law and all its processes serve to protect a nation’s people, property, and heritage.  Intellectual property rights and arts crime units serve to foster vital collaboration between law enforcement units around the world.” FBI Acting Deputy Assistant Director Michael Nordwall added, “the FBI recognizes the significant role artifacts like these play in a culture’s history and identity. We are honored to return these pieces to the people of Haiti.”

Returning these artifacts to Haiti continues a long tradition of U.S. support for Haiti’s rich cultural heritage.  Through the Ambassador’s Fund for Cultural Preservation, the U.S. Embassy has provided more than $720,000 to fund nine unique cultural heritage preservation projects around the country.  This fund was established by the U.S. Congress to support the preservation of cultural sites, cultural objects, and forms of traditional cultural expression around the world. Through this program, the U.S. Embassy in Haiti has provided over $250,000 to a project surveying earthquake damage done to historic buildings in Port-au-Prince in order to help with their preservation; over $135,000 to support the preservation of the Citadelle and Palais de Sans-Souci; and $200,000 in 2018 to conserve and restore the Maison Viviane Gauthier.