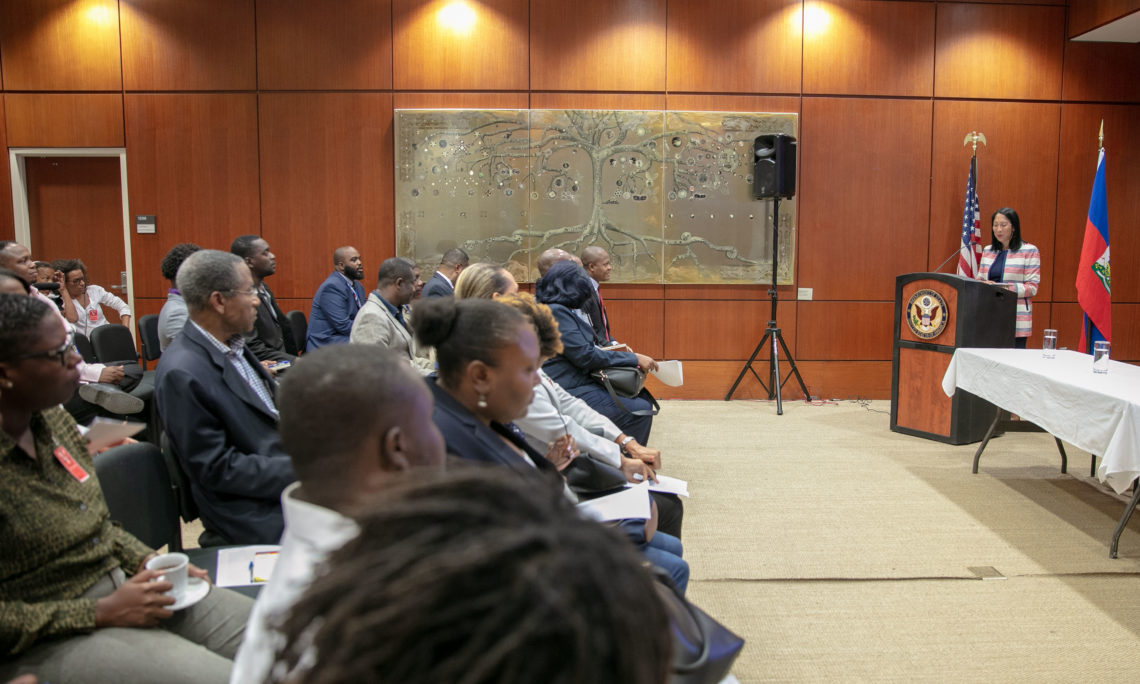 Ladies and Gentlemen, Good Morning and thank you all for being here.

It is an honor to have you all here today in recognition of the United Nation’s World Day Against Trafficking in Persons. Today we also recognize each of you here for your personal and professional commitment to ending this global challenge.

It was necessary to declare this day to raise awareness of the situation of victims of human trafficking and for the promotion and protection of their rights.

Haiti remains a source, transit, and destination country for TIP both internally and transnationally.

This is a major human rights issue and threatens the equality, autonomy and dignity of men, women and children who are subjected to forced labor and sex trafficking.

The film we will see today- “Lalo’s House”- written and directed by Kelley Kalli, sheds light on the issue of trafficking in Haiti. We are proud of this young American director who developed partnerships with likeminded Haitians seeking to raise awareness and to encourage individuals to boldly and sensitively ask the difficult questions when we sense something is wrong.

Films often help us to more deeply understand the plight of others. Whereas Kelley uses film to convey the plight of victims of trafficking in persons, we use our annual Trafficking in Persons report, to urge everyone – the Haitian government, civil society, and the mediato prevent trafficking, prosecute traffickers, and protect victims.

This program aims to increase awareness of trafficking in persons and strengthen the capacity of National Anti-Trafficking Committee, the Institute of Social Well-being and Research, and other ministries involved in the protection, prosecution and rehabilitation of children, women and other vulnerable populations.

However, it is up to all of us — including civil society and the Government of Haiti — to take the lead in combatting the scourge of trafficking for the benefit of the Haitian people.

The formation of a new government will present Haiti with an opportunity to renew its efforts to combat this phenomenon. We especially appeal to the Ministry of Social Affairs, which plays such an important role in anti-trafficking efforts.

We hope that the new government will make combatting trafficking in persons a top priority by signing the national anti-trafficking action plan, finalizing the National Anti-Trafficking in Persons Committee, and allocating sufficient resources for the committee to fulfill its mandate.

We acknowledge the positive strides that POLIFRONT has made to arrest traffickers along the border. Unfortunately, as noted in the 2018 Trafficking in Persons Report, few trafficking cases make it to trial, and as a result, there are very few trafficking convictions in Haiti.

Additionally, I remember during an April roundtable at the U.S. Embassy that participants noted the need for more coordination between legal actors and increased awareness about trafficking in persons in the Haitian government, including the police.

No single part of Haitian society can combat this phenomenon alone. Ministers, journalists, civil society, Police, prosecutors, and judges must work together.

In the room today, we have actors from a wide variety of sectors, government, civil society, and media. Civil society and the media play a large role in increasing awareness and providing assistance to victims of trafficking.  I am pleased to recognize that with us here today we have Marc Evens LeBrun from Loop Haiti and Challenges Magazine who just won the prize for Investigative Journalism in the Justice Sector in a competition supported by JSSP and USAID.

We are pleased to announce that we will be supporting this awareness effort through a public diplomacy grant to the Mwen Foundation who will be traveling all over Haiti sharing the film with dialogue and discussion.

Therefore, I encourage you all to continue to raise awareness of this issue at all levels of Haitian society and to continue your advocacy.

With our combined efforts, together and through a Haitian-led process, we can significantly improve the human trafficking situation here in Haiti.

Thank you all for being here.