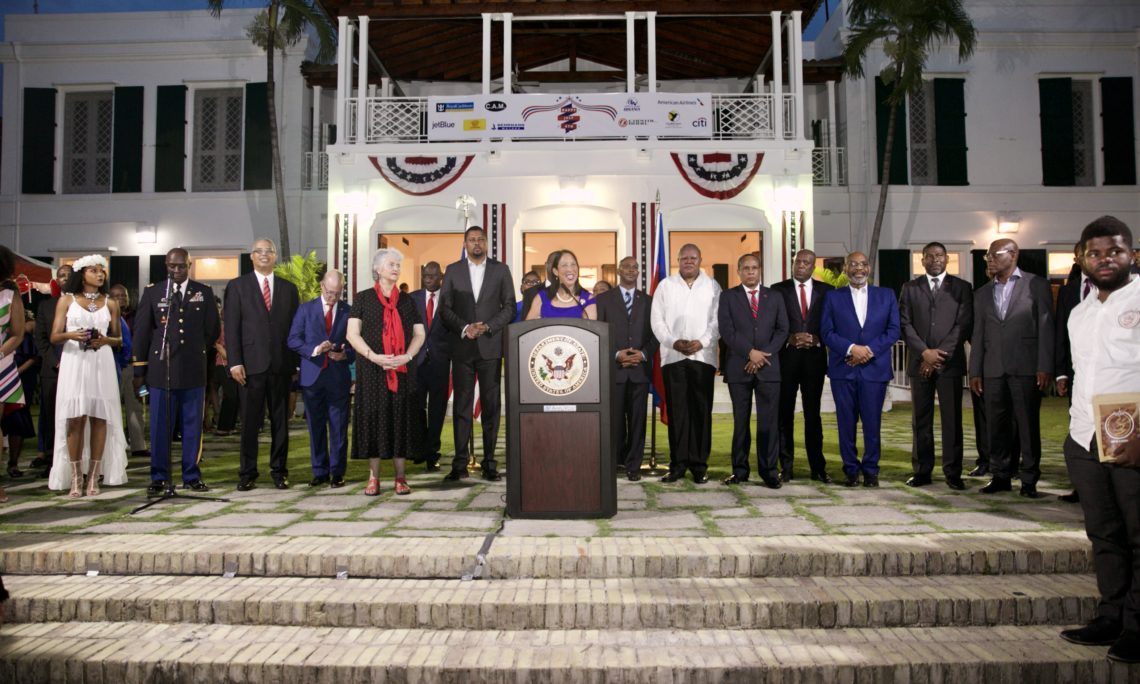 We are very glad you could join us this evening.

And isn’t the music great? The amazing Déja Grüv band comes to us from our Nation’s Capital, Washington, D.C. – that was an amazing rendition of the Start Spangled Banner! And  thank you, Gospel Kreyol, for that beautiful rendition of the Haitian national anthem!

Tonight, I thought I would start with a little history, because history is important. History is important, because it allows us to understand our past–which in turn allows us to understand our present and to build our future. Going back in history, I want us to consider this evening the many extraordinary contributions of Frederick Douglass, the eminent American author and abolitionist.

And of course, Frederick Douglass was also my esteemed predecessor – he served as U.S. diplomatic Chief of Mission in Haiti from 1889 to 1891.

Frederick Douglass’ portrait is prominently featured at our Embassy in Tabarre (and yes, I borrowed it for the entry table as you walked into my home this evening).

In the United States, we remember Frederick Douglass for his 1852 Independence Day speech on the importance of equality and social justice, and the need to value the worth and dignity of all human beings.

This revered American leader was born a slave in 1818 on the eastern shore of Maryland and was enslaved for twenty years before fleeing northwards. He dedicated his life to public service to the United States. After moving to Washington, DC in 1872, Douglass held a series of high-profile positions under five U.S. presidents, including his years of service as the U.S. diplomatic representative in Haiti.

In addition to his long and distinguished career, Frederick Douglass is also remembered in the U.S. today for the sheer power of his words.

Douglass used his extraordinary oratorical prowess to convey the urgency and importance of freedom and equality. Frederick Douglass understood well the history of both the United States and Haiti. When Douglass spoke at the opening of the Haiti Pavilion at the World’s Fair in Chicago in 1893, he delivered a stirring speech describing Haiti’s dramatic road to a free and independent republic. These are his powerful words, and I quote:

“We should not forget that the freedom you and I enjoy today is largely due to the brave stand taken by the black sons of Haiti ninety years ago …When they struck for freedom, they builded better than they knew. “

You, know, I love that turn of phrase: “They builded better than they knew…” In other words, Haiti’s history, Haiti’s story, is a part of America’s history and America’s story.

Douglas also stated that, “There are many reasons why a good understanding should exist between Haiti and the United States. Her proximity…her history, her progress and her possible destiny… Measuring distance by time and improved steam navigation, Haiti will one day be only three days from New York and thirty-six hours from Florida; in fact our next door neighbor. “

Douglass also commented that, “No other land has purer water, richer soil, or a more happily diversified climate. She has all the natural conditions essential to a noble, prosperous and happy country… Yet, there she is, torn and rent by …clamorous factions and anarchies, floundering…in a labyrinth of social misery…. While this spirit of turbulence shall prevail… her well-won independence will be threatened…the arm of her industry will be paralyzed, the spirit of enterprise will languish, national opportunities will be neglected, the means of education will be limited … her hopes…will be blighted.”

In this passage, we hear Douglas expressing concern about Haiti’s turbulence in the 1800’s;  we hear him troubled by how this turbulence was affecting the everyday lives of  Haiti’s people. So what does this say to us, tonight, that Frederick Douglass had the same concerns 126 years ago as many have today? Turbulence, insecurity, and the impact on education and the economy – these are current concerns here.

In fact, when his fellow abolitionists criticized his willingness to dialogue with slave owners, he famously replied:   “I would unite with anybody to do right and with nobody to do wrong.”

In other words, he was willing to sit across the table with anyone, from any walk of life, and enter into dialogue in order to preserve the common good.

This is a message to all of us coming from the great Frederick Douglass:  the need to enter into good-faith dialogue to preserve the common good.

Frederick Douglass. Defender of liberty, Promoter of Dialogue, Equality and Social Justice – and great Friend of Haiti: “I would unite with anybody to do right, and with nobody to do wrong.”

By finding common and fruitful ground through dialogue, we hope to see around the world and here in Haiti that those of differing opinions can join forces and unite to improve the common good.

The Americans in the audience placed their hands over their hearts as we sang that our star-spangled banner yet waves “O’er the land of the free and the home of the brave.”

We recognize that owe a debt to Haiti in fighting for that freedom, as Haitians fought with us in the battle of Savannah in our revolutionary war.

Meanwhile, Haiti’s national anthem, the Song of Dessalines, urges “Pour le Pays, pour les Ancêtres–Marchons unis, marchons unis” ( “For our country, For our forefathers, United let us march.”) Indeed – “united let us march,” for the common good. To me,  that means seeking genuine, good-faith dialogue in order to provide education and access to healthcare for Haiti’s next generation, stability and security for all Haitian citizens, and  true economic opportunity for young Haitians.

I’d thus like to use this opportunity this evening to introduce you to our “Spotlight” Young Entrepreneurs, who hail from Martissant, Belair, Cite Soleil, St. Marc, Mirebalais, and Les Cayes as well as to Makendy Smith and Nadia Jean- Charles, who were awarded Forbes awards during Haiti Tech Summit two weeks ago.

These young people represent the best of what the U.S. Embassy is doing here to support Haiti’s future.

I think my esteemed predecessor, Frederick Douglass, would have been very proud of this partnership.

Let’s give a round of applause for these fantastic young entrepreneurs — they are doing a great job of showing the world what Haitian youth, energy, and business acumen are all about, and we were proud to sponsor them as our guests at the summit:

And thank you Hope for Haiti for making these young entrepreneurs’ dream businesses take a big step further through your support!

I’d also like to give shout-outs to this evening’s generous corporate sponsors:

Thank you for making this evening such a special one!