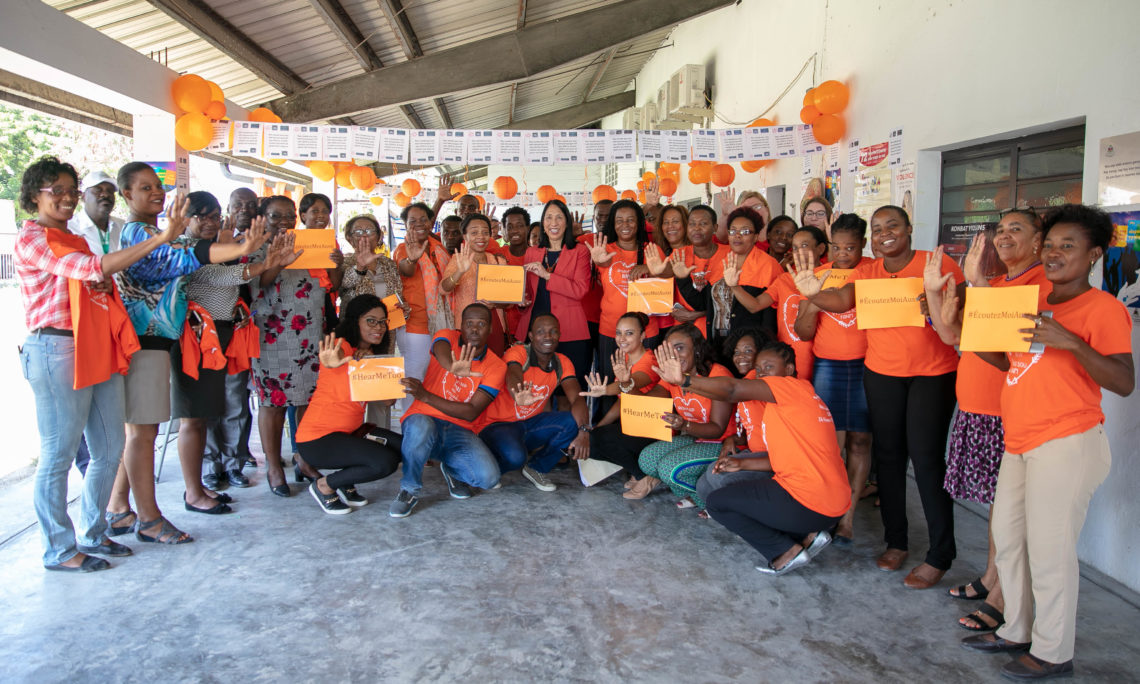 Good morning.  I am delighted to be here among you this morning.  Many of us are wearing orange today.  The 25th of this month has been designated a day of orange by the UN Women campaign in an effort to mobilize civil society, activists, and governments to amplify the campaign’s impact in the fight against gender based violence.  Participants from around the world are encouraged to wear orange in solidarity with this effort.

This color symbolize a better future and a world without violence against women and girls.  The theme of the 2018 campaign is Orange the World:  #HearMeToo, and this date marks the launch of the 16 days of activism which will end on December 10, 2018, International Human Rights Day.

I commend SONAPI and Share Hope for prioritizing the HerHealth project this year.  Businesses thrive when their employees thrive, which is exactly what Haiti needs from Gran d’Anse to Ounaminthe.

The United States recognizes October as Domestic Violence Awareness Month, and President Trump proclaimed that the United States –   founded on principles of liberty and justice — has no tolerance for domestic violence.  Personal relationships should be a source of comfort and support — a solid foundation for each person’s empowerment and achievement in his or her daily life. Certainly, these values are critical to Haiti’s founding as well. Far too often across the globe these relationships experience criminal violence, emotional abuse or isolation.

Gender-based violence is a global challenge in both public and private spaces, such as in the home, schools, and the workplace.  Preventing and responding to violence against women and girls requires all of us to take action—governments, communities, individuals, the private sector, and civil society.

The United States is committed to promoting gender equality and advancing the status of women and girls around the world.  Gender equality is a key U.S. foreign policy priority necessary for social, political and economic development. Such violence not only has health consequences that keep women from work, but it can also result in emotional or other physical trauma that renders women less likely to go to work.  Thus, the economic impact from lost productivity as a result of gender-based violence on developing countries, such as Haiti, can be as high as 3.7% of the country’s GDP.

Promoting a safe enabling environment for women, both at home and in the world of work, is a human rights imperative that could help close the gender gap in labor markets, and could increase worldwide GDP by as much as $28 trillion by 2025.

We all have a role in making our homes, places of worship, communities, and work places safe spaces.  We can offer our sisters, mothers, and aunts confidential conversations in order that those most affected can figure out how to best address her situation.  Partnerships between law enforcement, health clinics and the judiciary can all work to ensure that women have access to safety networks and equal opportunities.

And we cannot forget men. We should equallyu communicate with them in order that they understand that violence against women is reprehensible.

Partnerships with the police, health clinics and judicial systems can all contribute to guarantee women access to a safety network and equal opportunities.  For these reasons I’m so pleased to see so many of our USAID, CDC and PEPFAR partners here today.  Through Konbat Vyolans grants, USAID works to strengthen Gender Based Violence survivor-centered support by improving access to services, including crisis support, emergency shelters and transitional housing, medical and psychosocial care and legal aid.  Konbat Vyolans also supports a civil society coalition including the Center for the Promotion of Women Workers, Ayiti Nexus, and the Foundation for the Reproductive Heal and Family Education (FOSREF).

Our government agencies also support medical care, counseling and other support services to victims of gender-based violence throughout their treatment network, including a specific focus on key populations who are at high risk for gender-based violence.  In the framework of our support to the Haitian National Police, the U.S. financed a position for an American advisor for gender based violence.

I’m also delighted to see our PEPFAR being screened here.  These short videos created awareness with the popular J Perry targeted school children, dating singles, and families which have been shared broadly on television stations throughout Haiti and on social media.  These videos present us all with the opportunity to talk openly and discuss this too-often considered “taboo” subject.

As the Kreyol expression goes, “Tet ansamm nan laverite pou yo lavi miyo”…. The time is now for all of us to put our heads together to listen, share and brainstorm.  Let’s begin with this kick off of the 16 Days Against Gender Based Violence.