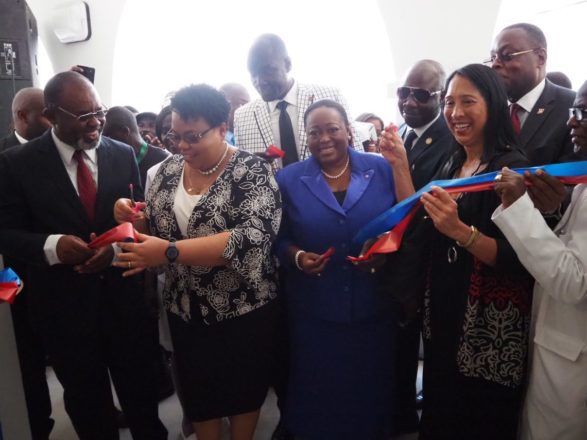 Department Director of the North

It is with great pleasure that I join you today on behalf of the American people to inaugurate the opening of a world-class medical facility in Haiti.  I want to also personally express my gratitude to all those who made this event a reality; I congratulate the Ministry of Health, the dedicated staff here at the hospital, and all the talented engineers and contractors whose hard work made a design into reality.

The new pediatric ward will support caring and healing for the Justinien University Hospital’s most precious cases: the children of Cap Haitien and hopefully the entire Nord department.

This construction project quadrupled the size of the former ward, which had deteriorated after decades of service.

With support from USAID through PEPFAR, today we inaugurate a brand new space that includes wards for newborns, infants, young children, and adolescents, as well as exam rooms, a triage area, and isolation rooms for those with highly contagious diseases.

As a result, the young patients who come to Justinien for care will be able to receive some of the best health services in all of Haiti.

Today’s inauguration highlights the continued partnership between the American people and the people of Haiti to bring high-quality health services to all Haitians.

This partnership has led to many health indicator improvements, including a decrease in HIV transmission from mother to child, from nine percent in 2009 to five percent in 2017.

But there is still work to do, particularly to reach our shared goal of reducing Haiti’s high rates of neonatal and infant mortality, which are driven in part by the fact that over 60 percent of births still occur outside health facilities.

Modern health facilities are one part of the solution to this problem, and the new pediatric ward at Justinien is one of several critical health infrastructure projects the United States has invested in building or repairing in Haiti.

With increased investment from the Government of Haiti in combatting mortality among newborns and infants through its Paquet Essential de Services, this pediatric ward can help many more pregnant women safely deliver their babies with a skilled provider.

That’s why we thank the Haitian Government for its commitment to build on the U.S. Government’s investment by filling these spaces with the best Haitian medical professionals and the equipment needed to effectively serve patients.

As part of our efforts to better align our work with the Government of Haiti’s priorities and to support Haiti in its development journey, the United States will be a strong partner in helping the Haitian Government mobilize greater resources for health financing.

All of us here today know that without a robust health budget, a building like this one cannot deliver on its full promise to the Haitian people.

We commend our friends at Justinien University Hospital, its staff, and the community it serves and assure you of our continued partnership in building a healthier future for Haiti.