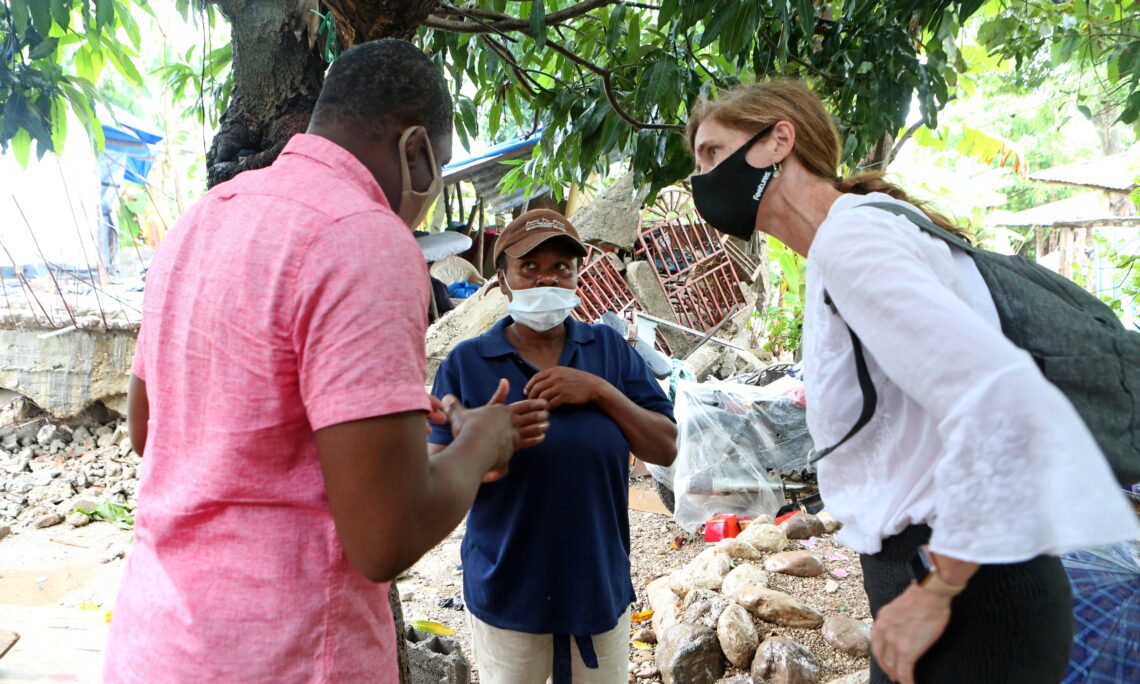 The below is attributable to Spokesperson Rebecca Chalif:‎

On August 26, Administrator Samantha Power traveled to Haiti, where USAID is leading the United States government response to the 7.2 magnitude earthquake that struck on August 14. While in Haiti, Administrator Power met with Haitians impacted by the disaster as well as Haitian Prime Minister Ariel Henry and other Haitian government officials. She also met with those contributing to the U.S. response on the ground, including the USAID Disaster Assistance Response Team (DART), members of the US military, and USAID staff based in Haiti. During her visit Administrator Power emphasized the United States’ commitment to supporting the people of Haiti during their time of need and announced $32 million in new humanitarian assistance from USAID to support earthquake response efforts.

Maniche was among particularly hard-hit towns in the region. Administrator Power met with families whose homes were destroyed by the earthquake and visited their homes with them to see the damage. She had numerous conversations with impacted community members, as well as with Maniche’s mayor, police chief, local firefighters and Civil Protection officials. The group visited the town’s school, which was destroyed, and discussed the challenges facing children who wouldn’t be able to start the school year as planned. The Administrator also met with USAID Haitian surge staff who joined with the Haitian officials as part of the immediate response to the earthquake. The group also met with local Haitian partners of the UN World Food Program, which recently distributed USAID food assistance to more than 5,000 people in the town. Last week, WFP began transporting from Port-Au-Prince 830 metric tons of USAID food supplies—enough to feed more than 62,000 people for one month—and is distributing it in affected areas.

In Port-au-Prince, Administrator Power, Ambassador Sison, Admiral Faller and Rear Admiral Keith Davids, commander of Joint Task Force (JTF)-Haiti, met with Haitian Prime Minister Ariel Henry and Jerry Chandler, Director General of Haiti’s Civil Protection Agency, to discuss the continued scaling up of U.S. assistance effort and continued collaboration with the Government of Haiti on the earthquake response and recovery. Administrator Power emphasized the importance of improved security in addressing the medium and long-term needs of the Haitian people. The Administrator and Prime Minister agreed that continuing to partner to build capacity within the Government of Haiti is a priority going forward.

Administrator Power held a press conference in Port-au-Prince where she began by expressing her profound condolences to the families of the US service members and Afghans who were killed in Kabul today. She then described how USAID’s $32 million in just-announced humanitarian assistance would support earthquake response efforts, including by supporting humanitarian partners delivering urgently needed health care services, emergency shelter and food, safe drinking water, hygiene and sanitation assistance, gender-based violence prevention and response, child protection, and psychosocial support services.

Later in the day, Administrator Power visited SOUTHCOM’s JTF-Haiti Operations Center in Port-au-Prince, where she thanked Admiral Faller and members of JTF-Haiti for their work providing air transport for relief personnel and supplies in support of USAID’s earthquake response, and for medevacing critically injured Haitians to receive medical treatment. As of August 26, JTF-Haiti–including the U.S. Coast Guard–has conducted 413 missions, assisted or rescued 458 people, and delivered more than 205,700 pounds of vital aid, including food, water, medical supplies, and equipment.

Afterwards, Administrator Power met with USAID Haitian staff who were impacted by the earthquake. She also sat down with members of the USAID DART team to thank them for their work leading U.S. government response efforts on the ground. She then joined them in a memorial that honored the life of DART member and revered USAID colleague Tresja Denysenko. Denysenko passed away unexpectedly on August 19 in Haiti while serving on the DART.

For the latest updates on USAID’s humanitarian assistance in Haiti: August 14 2021 Haiti Earthquake.